Celebrating 10 Years of ACE in Space 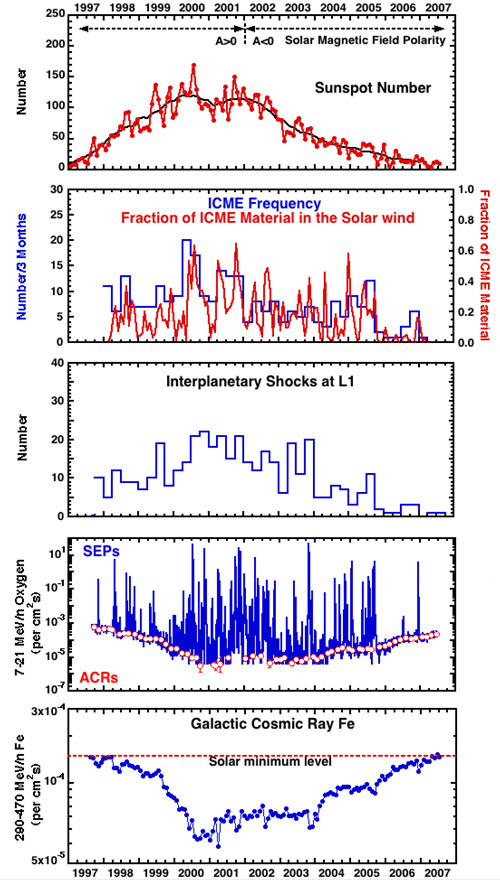 NASA's Advanced Composition Explorer (ACE) was launched from Cape Canaveral on August 25, 1997, and shortly thereafter began its journey out to L1. ACE was launched into solar minimum conditions, and the plots to the right indicate that on its 10th anniversary in space solar minimum conditions have returned to 1 AU, as demonstrated with data from several ACE instruments.

The top panel shows the monthly and smoothed sunspot number, which had a broad maximum in 1999-2002. By 2007 the sunspot number returned to solar-minimum levels. Indicated at the top is the solar magnetic field polarity, which reversed near the end of 2001.

The second panel shows (in blue) the distribution of interplanetary coronal mass ejections (ICMEs) observed since early 1998 when ACE reached L1 (tabulated by Richardson & Cane using SWICS & SWEPAM data; see ACE News #84). From an average of ~50/yr in 2000-2001 the ICME rate dropped to ~2/yr in the first half of 2007. Also shown in Panel 2 (red trace) is the fraction of a solar rotation that ICME material dominates, as opposed to slow or fast wind (based on the ionic charge-state composition; see ACE News #106). ICME material was present >50% of the time during periods such as July 2000, November 2001, and January 2005, and closely tracks the ICME rate.

As expected, the distribution of interplanetary (IP) shocks observed by MAG and SWEPAM also has a strong solar-cycle dependence -- most of these shocks are due to CMEs. However, the shock and ICME distributions differ somewhat, possibly due to variations in the rate of fast CMEs. By 2007 the IP shock rate is more than an order of magnitude less than in 2000-2003.

The daily average rates of oxygen from SIS in the fourth panel show evidence of >100 solar energetic particle (SEP) events during solar cycle 23, including four that rank in the top 10 of the space era. The SEP distribution is similar to that for IP shocks. The underlying quiet-time O intensity (open circles) is due mainly to anomalous cosmic ray (ACR) O accelerated in the outer heliosphere. At 1 AU the ACR intensity varies by ~100 over the solar cycle.

The galactic cosmic ray intensity at 1 AU is anti-correlated with solar activity (bottom panel). Measurements by CRIS show that ~380 MeV/nuc Fe has now returned to the 1997 solar-minimum level. It is interesting that the ACR O intensity in mid-2007 is ~3x lower than in 1997. Models predict that the ACR intensity and interplanetary gradient depend on the polarity of the solar magnetic field. During the present A<0 phase of the 22-year solar cycle, ACRs entering the inner heliosphere drift along the wavy interplanetary current sheet rather than down from the polar regions. The next few years of solar-minimum data from 1 AU, Ulysses, and the Voyagers will determine the behavior of ACRs during a negative-polarity solar cycle.

During the coming years multi-point data from STEREO, ACE, and other spacecraft will provide a new perspective on these studies by measuring the longitudinal structure and distribution of ICMEs, IP shocks, SEPs, and suprathermal ions, and by correlating these in situ observations with multi-point imaging of the corona and inner heliosphere. The ACE spacecraft remains healthy, and since adopting a new orbit about L1 in 2001, now has sufficient fuel to continue operation at L1 until ~2022.

This item was contributed by Richard Mewaldt & Christina Cohen of Caltech, Chuck Smith of the University of New Hampshire, Ruth Skoug of Los Alamos National Lab, Liang Zhao & Thomas Zurbuchen of the University of Michigan, and Ian Richardson & Tycho von Rosenvinge of GSFC. Address questions and comments to