The Origin of Energetic 3He in the Inner Heliosphere 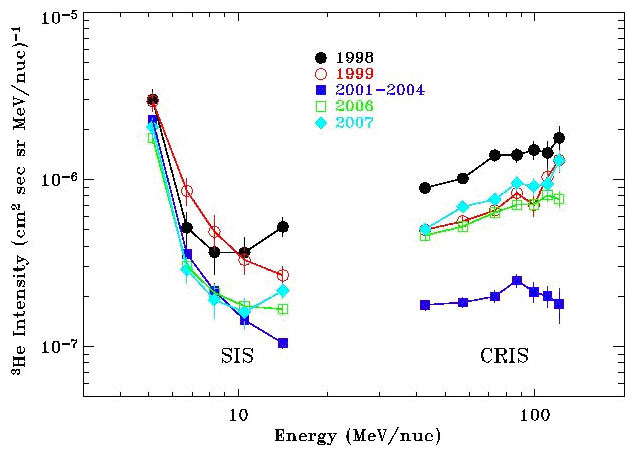 Energetic 3He in interplanetary space is believed to originate from two well-established sources, from 3He-rich solar energetic particle (SEP) events and from the fragmentation of galactic cosmic ray (GCR) 4He in the interstellar medium. The two sources of 3He have very different spectra in the MeV/nuc range, which help to distinguish between the two populations near Earth.

3He quiet-time intensities observed from SIS and CRIS over five different periods during the solar cycle are shown above. Quiet time days are selected by requiring 5 MeV/nuc 3He intensities to be <5x106 (cm2 sec sr MeV/nuc)-1 with a 3He/4He ratio that is > 5% (these criteria may bias the lowest energy intensities shown above). Two significant features stand out in these energy spectra. Below ~10 MeV/nuc, the energy spectra exhibit a clear turn up in all time periods studied, suggesting that these nuclei originate from a superposition of small 3He-rich SEP events (as discussed by Richardson et al. in 1990, Mason et al. in 1999 and Slocum et al. in 2002), possibly accelerated to higher energies in interplanetary space. In addition, the 3He spectra from SIS flatten at higher energies and even exhibit a clear turn-up during solar minimum conditions (1998 & 2007). Furthermore, the 3He intensities derived from SIS are consistent with the intensities observed at higher energies from CRIS, suggesting that above ~10 MeV/nuc, the 3He population is dominated by GCRs of secondary origin.

The changing level of solar modulation during the solar cycle also plays a significant role in defining the energy spectra for these two populations. The decrease from 1998 to 2004 in the SIS 3He intensity between 10 and 15 MeV/nuc is consistent with a GCR origin since the level of solar modulation increased significantly in 2000. Comparing the 2007 3He intensities at 10-15 MeV/nuc with the intensities during 1998-99 also suggests a galactic origin for these particles, since the solar modulation level in 2007 is significantly less than at solar maximum and not quite at its level of 1998. We expect the 10 to 15 MeV/nuc intensities to further increase as we continue into early 2008.

This item was contributed by Georgia de Nolfo of NASA/GSFC and Mark Wiedenbeck of JPL. Address questions and comments to