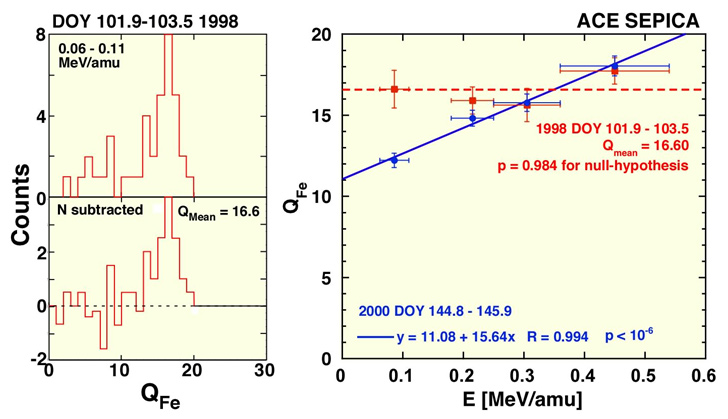 (Left): Fe charge state distribution in the lowest SEPICA energy range (0.06-0.11 MeV/amu) with background counts from nitrogen included (top) and subtracted (bottom), for an SEP event in April 1998. (Right): Mean Fe charge states as a function of energy for the same event (in red) with overall mean charge state and test result for null-hypothesis (i.e. random distribution around mean). Shown for comparison is an impulsive SEP event from June 2000 (in blue).

Earlier observations with ACE/SEPICA, SAMPEX/LICA, and SOHO/STOF have shown that highly ionized Fe in solar energetic particle (SEP) events (mean QFe > 14) is usually coupled with an increase of the mean charge state with energy in the range from 0.01 to 1 MeV/amu (see ACE news #107). At the lowest energies the mean charge state of Fe is typically found to be well below <Q> = 14. Recently, this has been demonstrated for all impulsive SEP events that were observed with SEPICA (DiFabio et al., ApJ, Nov 2008), indicating that the greater degree of ionization at higher energies was established by electron stripping in the low corona (e.g. Kartavykh et al., ApJ, 671, 947, 2007). However, observations of solar wind charge states have shown a widespread presence of QFe ≥ 16, associated with a hot plasma environment in solar wind from active regions and in interplanetary CMEs (e.g. Lepri et al., JGR, 106, 29231, 2001; ACE News #52). This raises the question of whether there are any SEP events that show an indication for acceleration of such hot material, which should show up as high charge states at the lowest observed energy, with no significant increase with energy.

A survey of all 60 SEP events observed with ACE/SEPICA has revealed two time periods with <QFe> ≥ 16 in the lowest SEPICA energy range (0.06 0.11 MeV/amu). One such SEP event from April 1998 is shown in the figure above, which shows the charge-state distribution at the lowest energy on the left and the mean charge states from 0.06 to 0.54 MeV/amu on the right. Also shown for comparison is an impulsive SEP event in June 2000. The April 1998 event, with starkly different characteristics than previously studied events, appears to point to the acceleration of hot material, which apparently occurs only infrequently.