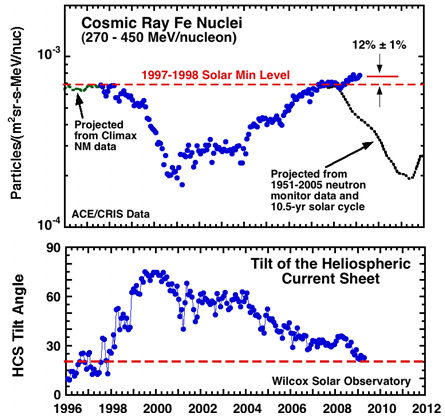 Recent Ulysses data show that during the current solar minimum the interplanetary magnetic field strength and solar wind pressure are at the lowest levels of the space era. Since the solar wind and its embedded magnetic field play key roles in controlling the access of galactic cosmic rays (GCRs) to the inner heliosphere, one might expect that the GCR intensity at Earth would also be at record levels.

The figure above shows ACE measurements of the cosmic-ray Fe intensity near the peak of the cosmic-ray intensity spectrum. Also shown is the projected intensity for 2008-2012 based on 1951 2005 Climax neutron-monitor observations projected forward using a 10.5 year solar cycle and the projected intensity for 1996 thru late 1997 based on scaling the Fe intensity versus Climax data from 1998 2005. During mid-2007 the Fe intensity was only slightly greater than the maximum in 1997-1998 (which was comparable to 1976 solar-minimum cosmic-ray levels measured by IMP-8). Although the projection suggested that the intensity would begin to decrease after 2007 with the expected onset of solar activity, instead, solar-minimum conditions have continued, and there was actually an increase in the GCR intensity early in 2008. From October 2008 thru March 2009 the 6-month average intensity was 12% ± 1% above the maximum reached in 1997-1998.

The GCR increase in 2008 is likely related to a drop in the tilt of the heliospheric current sheet (HCS) in early 2008 (bottom panel). During 2006-2007 the tilt was ~30° - 40°, considerably greater than during the 3 previous solar minima, when it reached <20°. During the current phase of the ~22-year solar cycle a larger HCS tilt means that cosmic rays traveling in along the ecliptic plane must traverse a longer path, reducing their 1-AU intensity. If the HCS tilt drops below its latest value of ~22° before the onset of new solar activity, it is likely that the GCR intensity will reach even higher levels.

These recent GCR data are important to the Human Exploration program since they demonstrate that not all solar minima are the same, and that radiation levels in interplanetary space can exceed those experienced earlier in the space era (as is also indicated by measurements of Be-10 in ice cores deposited over the last few centuries).

This item was contributed by R. Mewaldt and R. Leske of Caltech, K. Lave of Washington University, and M. Wiedenbeck of JPL. Address questions and comments to