Nonuniformity of Spectral Indices in the Inertial Range

In a recent series of papers using Wind data Podesta et al. (JGR2006, ApJ2007) showed that the power spectral index for solar wind velocity fluctuations in the inertial range at 1 AU is approximately -3/2. The inertial range is the part of the spectrum where energy is transported without dissipation to smaller scales where it heats the background plasma. That transport dynamic dictates the rate of in situ heating of the plasma. The Podesta result stands in contrast to numerous magnetic field results showing -5/3 spectral indices and suggests significant changes in the theories that describe energy transport in the inertial range. Although there exists a broad range of predictions and simulations addressing the multi-dimensional nature and spectral form of turbulent magnetohydrodynamic (MHD) power spectra, there are no predictions at present that embrace this dichotomy. To make matters worse, there are several theories that predict either of the two different spectral indices, but those predictions always apply to both magnetic and velocity spectra uniformly. Spectra may vary as a function of length scale or orientation relative to the mean interplanetary magnetic field (IMF), but there is no established theory of turbulence that predicts different spectra for the two fields. 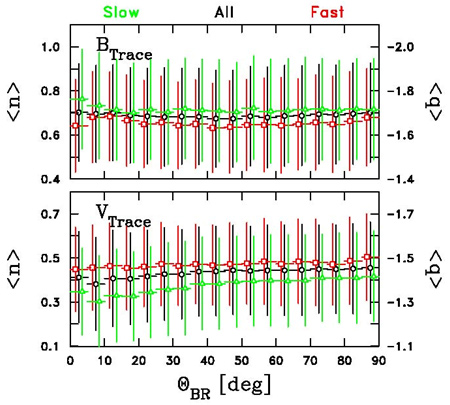 At the same time numerous theories have been presented and are evolving to explain the apparent distinction between field-aligned and perpendicular wave vectors. Reduced MHD (RMHD) theory suggests that parallel and perpendicular wave vectors are essentially decoupled with some degree of ongoing energy transport from parallel to perpendicular wave vectors. Goldreich and Sridhar (ApJ1995) predict that depletion of the parallel wave vectors will become sufficient as to steepen the measured spectrum to an index of -2 when the IMF is aligned with the solar wind flow (radial). Both Horbury et al. (PRL2008) and Podesta (ApJ2009) examine inertial range spectra at the smallest scales of the inertial range (1 to 10 sec) using wavelet techniques and find evidence of steepening to -2 spectral indices when the IMF is aligned with the solar wind flow.

Tessein et al. (ApJ2009) examine 10 years of ACE observations spanning solar minimum and maximum conditions. They compute second-order structure functions S2(τ) ~ Aτn for each hour of data, fit each hourly result to extract the index n for lags of 1 to 10 minutes corresponding to the middle scales of the inertial range. They relate the index of S2 to the index of the underlying power spectrum E(f) ~ f q according to the familiar relation q = -(n+1) and gather the computed indices according to the orientation of the IMF and solar wind speed. They compute means, errors, and standard deviations for the trace of the IMF fluctuations BTrace and the trace of the velocity fluctuations, VTrace, and present the resulting statistics shown above. Uncertainties represent standard deviations. On average 5000 independent measurements contribute to each average, making the error-of-the-mean ~70 times smaller. While they confirm that the Podesta (JGR2006, ApJ2007) results are independent of IMF direction, they find no evidence of any statistically significant dependence of the spectral index on the orientation of the mean IMF as found at small scales by Horbury et al. (ApJ2008) and Podesta (ApJ2009) and they find no evidence of the -2 spectral index predicted by Goldreich and Sridhar.

Although interesting, the analysis raises more questions than it answers: How can the velocity and magnetic spectra differ? Will the two spectral forms evolve toward one another and at what rate? How can the parallel and perpendicular wave vectors possess the same spectral index if they are essentially decoupled? Will they decouple further as predicted? What is the underlying and most fundamental dynamic that can explain these spectral forms when all current evidence indicates that inertial range spectra are generated in situ and do not originate from a single common solar source? Is it possible that the smallest scales of the inertial range turbulence are more evolved than the larger scales while both contribute to the energy-conserving transport that heats the plasma? Lastly, what does this say for the predictions of Goldreich and Sridhar who require a non-isotropic energy transport while velocity and magnetic fields seem to evolve individually?