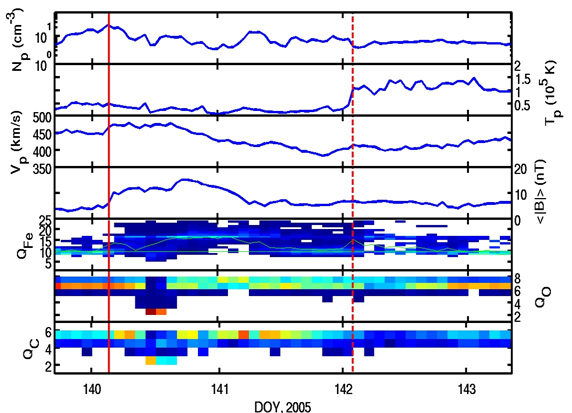 Coronal mass ejections (CMEs) are explosive events which escape the Sun's corona, carrying solar material and energy into interplanetary space. The classic picture of a CME in the corona presents a "three-part structure", including a bright front at the leading edge indicating dense plasma, presumably due to the interaction of the CME with ambient plasma, a low density cavity - probably an embedded flux rope, and the so-called core which is often observed to be associated with the erupting prominence. Although there are in situ analogs to the first two CME parts, there are very few (<10) reports of cold, prominence-type plasma since solar wind measurements began. Three early studies (Schwenn 1980, Bame 1983, and Zwickl et al. 1982) identified cold material in ICMEs based on the presence of He+, thought to be evidence of the erupting prominence, including only three events with cold charge states in eight years. A similar event occurred in May 1998 (Skoug et al. 1999), for which Gloeckler et al. (1999) reported the first high-resolution observations of extremely low charge states of C, O and Fe in an ICME.

We have conducted the first long-time survey of such low charge states with the Solar Wind Ion Composition Spectrometer (SWICS) on ACE and discovered a substantially larger rate of ICMEs that include low charge-state plasmas. To identify cold material, we calculate the relative abundance of C2-3+/CTot, O4+/OTot, and Fe4-7+/FeTot. These charge states are generally not present in solar wind flows. Their presence indicates a source temperature of ~60,000 - 200,000 K, much lower than coronal temperatures (~106 K). For a threshold value, we require all three ratios to be more than one standard deviation above the mean to eliminate biases towards high-density flows. In addition, we require the speed of the low charge state ions to be within 15% of the He velocity.

An example of a cold ICME event is shown above. The top three panels show solar-wind proton density, temperature and speed from ACE/SWEPAM, followed by magnetic field magnitude from ACE/MAG. The bottom three panels show the charge state evolution for Fe, O, and C from SWICS. The shading indicates the relative ion density, with blue lowest and red highest. The solid/dashed vertical red lines mark the front/rear ejecta boundaries from Cane & Richardsons ICME list (http://www.ssg.sr.unh.edu/mag/ace/ACElists/ICMEtable.html). The green track labeled QFe shows the average Fe charge state (<QFe>). Outside of the ICME, Fe10+ is most abundant, while O is mostly in charge states 6+ and 7+ and C is mostly 5+ and 6+. However, near the front of the ejecta, the most abundant ions shift dramatically to states as low as C2+, O2+, and Fe5+. The ejecta contain both hot and cold plasma for all three species (see, e.g., the Fe16+ enhancement). For each species the cold plasma is confined to a fairly short period on DOY 140, 2005.

We find that these events are much more common than previously assumed: in almost 11 years we find 10 "cold ICME" events, ~5% of all ICMEs observed during this time.

This item was contributed by Susan Lepri and Thomas Zurbuchen of the University of Michigan. Address questions and comments to