Reservoirs of Near-Relativistic Electrons in the Inner Heliosphere: ACE and Ulysses Observations 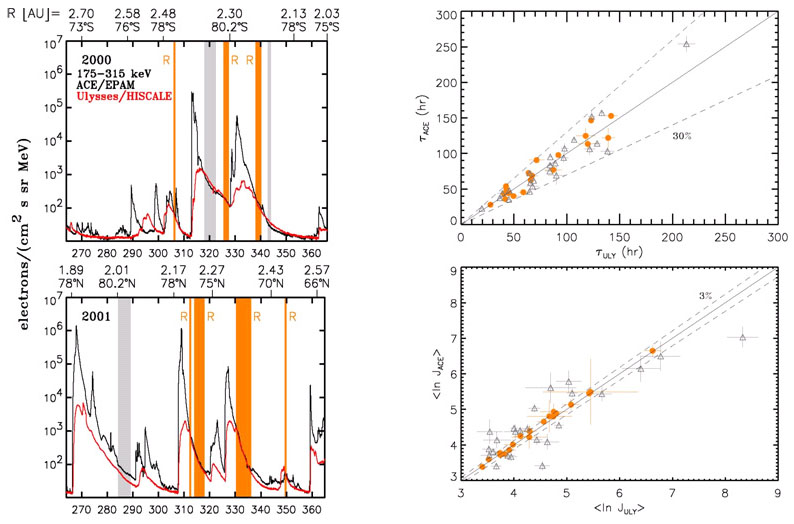 Comparison of ~10 MeV proton measurements during the late decay phase of large solar energetic particle (SEP) events in the 1970s by McKibben [JGR 77, 3957, 1972] and Hamilton [JGR 82, 2157, 1977] between the Pioneer spacecraft (in deep space) and IMP spacecraft (in Earth orbit) revealed comparable intensities, despite their large separations in helio-longitude. Later studies by Roelof et al. [GRL 11, 1243, 1992 and references therein] comparing Ulysses and IMP measurements of ~1 MeV ions demonstrated that the field-aligned gradient of intensities in the decay phase of such SEP events was remarkably small, suggesting that a "reservoir" of SEPs was established along interplanetary magnetic flux tubes in the inner heliosphere (inside 5 AU). The present ACE-EPAM/Ulysses-HISCALE mission-long study confirms that the same reservoir behavior is observed in near-relativistic (175-315 keV), large solar electron events. Shown above left are hour-and-spin-averaged ACE/Ulysses electron intensities during the southern (2000, top panel) and northern (2001, bottom panel) solar-maximum Ulysses' polar passes. Periods were selected for analysis (vertical bars) if the measured intensity decay rates (dlnj/dt) differed by no more than 30%. Within these selected periods, if the intensities themselves differed by no more than 3%, they were designated as reservoirs (marked by "R" and given an orange vertical bar).

Such plots were generated for the period spanning from September 1997 to the end of 2007. A scatter-plot was made of the decay times for each event (τACE vs. τULY, upper right panel); again, the orange points are for events where the intensities agreed to within <3%. The intensities themselves are plotted in the lower right panel (<lnjACE> vs. <lnjULY>, averaged over the selection period). Almost half of the selected periods (19/43 events) had logarithmic intensities agreeing within <3% (orange points), thus meeting our criteria for a reservoir (orange bars). Remarkably, the orange points could come from periods when ACE and Ulysses were widely separated in radius, latitude, and longitude [see Lario, 2009 for details]. Consequently, the reservoir phenomenon is widely prevalent throughout the inner heliosphere for the decay phase of large near-relativistic electron events.