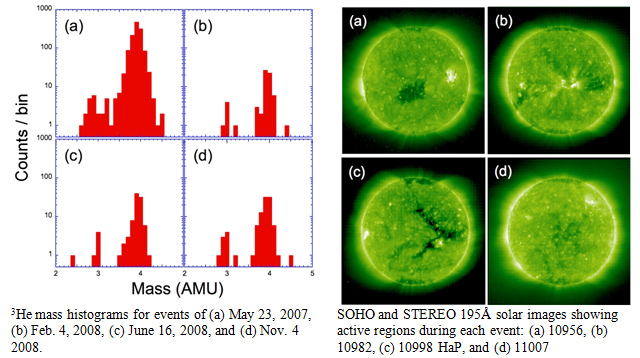 Solar energetic particle (SEP) events with huge enrichments of the rare isotope 3He have long been studied since their extreme fractionation is evidence for a distinct acceleration mechanism. These events, which typically have modest intensities, are associated with injections of energetic electrons and type-III radio emissions. Recent work has shown that the mechanism that produces SEP 3He is operating nearly continuously during active periods, with energetic 3He present in the interplanetary medium up to 90% of the time during solar maximum (Wiedenbeck et al. AIP CP679). The solar source regions for 3He-rich events have been identified with western hemisphere active regions that produce type-III bursts and jets (e.g. Wang et al., ApJ, 639, 495, 2006), and which lie near small coronal holes whose open field lines permit particles to escape into interplanetary space.

Because their small size opens the possibility of mis-identification of the source region or associated activity, we have surveyed the 2007-2008 solar minimum period for 3He rich events where the chances of spurious associations are minimized. About 50 active regions occurred during this period, four of which produced 3He-rich event activity at ACE (see left panel of figure). The events were quite small with fluences >10x less than typical events reported from ULEIS. Two of these events (a and d) had associated x-ray events, interplanetary electron events, and small CMEs often associated with 3He-rich events. The two other events (b and c) lacked these typical associations: they had no well-observed CME, no type-III burst, no interplanetary electron event, and very low (class A or less) x-ray activity, if any. They were, however, associated with western hemisphere active regions (b and c in right panel) where PFSS models showed field line connection to the ecliptic plane. Since there was only a single active region in the western hemisphere at the time of the events, the chances of misidentifying the source are small. While these two events do not negate the previously observed associations, they indicate that energetic 3He emission does not require the other types of activity, but rather that some processes associated with active regions are capable of energizing 3He and heavy ions to at least ~1 MeV/nucleon. It may be that the other associations such as small CMEs and type-III bursts are signatures of additional processes that further energizes this initial population, forming the more intense events (e.g. May 1, 2000; Nov. 17, 2006) reported previously.