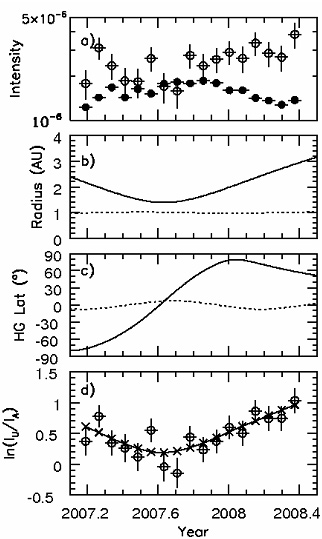 Anomalous cosmic rays (ACRs) are a sample of the interstellar medium, having originated as interstellar neutral gas, entered the heliosphere, become ionized and picked up by the solar wind, and carried to the outer heliosphere where they are accelerated to MeV energies. The site and mechanism of the acceleration is still to be determined. The particles reach the inner heliosphere, here defined to be <5 AU, by a combination of diffusing and drifting in the large-scale interplanetary magnetic field. The drift motions reverse with the change in polarity of the Sun's magnetic dipole, which reverses approximately every 11 years. In the A>0 part of the 22-year solar magnetic cycle, when the field northward of the heliospheric current sheet (HCS) is directed outward, positively-charged particles originating in the outer heliosphere tend to drift towards the heliographic equator from the polar regions (see Jokipii et al., ApJ, 213, 861, 1977). Many measurements during A>0 periods have confirmed that the latitudinal gradients of ACRs are positive in both the inner and outer heliosphere during such times. In the A<0 part of the cycle, which began in ~2001, the drift patterns are reversed and positive particles drift inward along the HCS. In this case, the particles should exhibit a negative latitudinal gradient, which has been observed in the outer heliosphere but has not yet been established in the inner heliosphere due to a lack of spacecraft positioned in the appropriate locations.

In a recent publication [Cummings et al., GRL, 36, L18103, doi:10.1029/2009GL039851, 2009], this issue was addressed using data from the Ulysses, Advanced Composition Explorer (ACE), and Solar Terrestrial Relations Observatory (STEREO) spacecraft to determine the radial and latitudinal gradients of ACR oxygen in the inner heliosphere for the first time during an A<0 part of the solar cycle. Panel a) of the figure shows 27-day averaged intensities of 7.3-15.6 MeV/nuc O from Ulysses (open circle) and ACE (solid circle) vs. time. The units are (cm2 s sr MeV/nuc)-1. The radial position of Ulysses (solid line) and ACE (dotted line) vs. time are shown in Panel b). Panel c) shows the heliographic latitude of Ulysses (solid line) and ACE (dotted line) vs. time. Finally, Panel d) shows the ratio of intensities (open circle) vs. time. The solid line connects best-fit points (X) to the equation

where gr is the radial gradient, Δr is the radial separation, gΘ is the latitudinal gradient, ΔΘ is |ΘU| - |ΘA|, and C is a normalization constant. A similar fit was done using STEREO and Ulysses O with 4.5-15 MeV/nuc. The combined results from the two energy intervals give gr = 48±13 %/AU, consistent with previous inferences for A<0 and larger than that determined in the inner heliosphere for A>0. The latitude gradient, gΘ, is consistent with zero and in the range -0.3 to +0.4 %/degree. During the time period of the fits, the tilt of the HCS was in the range 30-35 degrees. This low value of the latitudinal gradient suggests that during A<0 these particles are not able to propagate into the inner heliosphere by rapid drift along the heliospheric current sheet if the tilt of the sheet is as large as 30 degrees. This is perhaps because the pathlength along the sheet is large enough that diffusion is the dominant transport mechanism. In the outer heliosphere during A<0, Cummings et al. [21st ICRC, 6, 190, 1990] found that the gradients were strong functions of the tilt angle when the tilt dropped below ~25 degrees. Recently, the tilt has decreased to near 10 degrees and we expect that the intensity of ACR O in the inner heliosphere will continue to grow and that negative latitudinal gradients are likely to be established [see, e.g., Jokipii, Adv. Space Res., 9, 105, doi:10.1016/0273-1177(89)90317-7, 1989].

This item was contributed by Alan Cummings of Caltech. Address questions and comments to