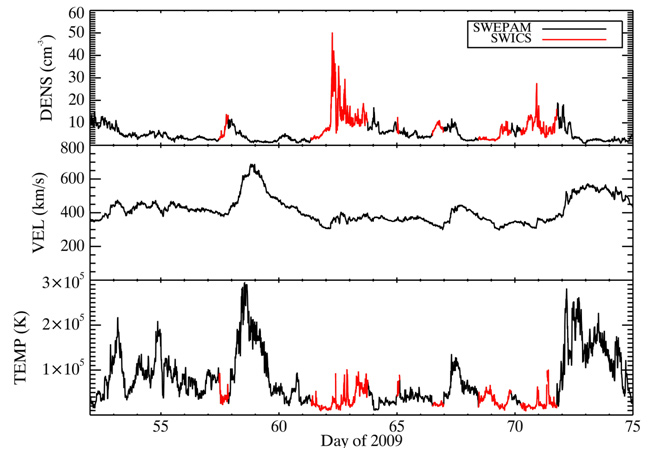 The ACE team is releasing a new Level-3 data product using combined data from its Solar Wind Electron, Proton Alpha Monitor (SWEPAM), and the Solar Wind Ion Composition Spectrometer (SWICS). Both instruments measure solar wind protons, although SWICS is optimized for measurements of the composition and properties of heavy ions in the solar wind.

The single-instrument ACE-SWEPAM and ACE-SWICS data sets have provided two of the most used and most comprehensive solar wind ion datasets in heliophysics. Together, they deliver nearly 40 specific quantities and distributions for any given time-step, containing comprehensive information about solar wind distribution functions and compositional information for nine different chemical elements in the solar wind.

The SWEPAM and SWICS teams are now releasing a new Level-3 data-product that takes advantage of the complementarities of the two instruments. Using an automatic process, data are meshed to provide a nearly complete ACE time-series of proton density, temperature and velocity. We believe this to be the first such integrated intra-spacecraft data-product in heliophysics, combining comparable measurements across instruments to obtain the most complete time-series of solar wind protons at the ACE location.

The value of this combined data set is demonstrated in the Figure, which shows integrated SWEPAM and SWICS data for a time-period of 25 days in early 2009. The data indicate the passage of two high-speed solar wind streams, with slower solar wind in between. For this period, SWEPAM provides the majority of the data (shown in black), and SWICS primarily provides data at times of low solar wind speed (shown in red).

To download these data, and to learn about caveats on their use, please refer to the SWEPAM/SWICS Level 3 Merged Solar Wind Proton Data web page.

This item was contributed by Jim Raines, Susan Lepri and Jon Thomas of the University of Michigan, and Ruth Skoug of Los Alamos National Laboratory. Address questions and comments to