The Sun Erupts from its Lengthy Slumber

It's been ~3 years since the last extremely hot interplanetary coronal mass ejection (ICME) was observed by the Advanced Composition Explorer (ACE)! In fact, for a while, many people believed that the solar minimum might continue on for a much longer period than expected. But, things are looking up on the Sun! Coronal Mass Ejections (CMEs) are starting to lift off from the Sun more frequently with the appearance of more active regions associated with the Sun's new polarity. 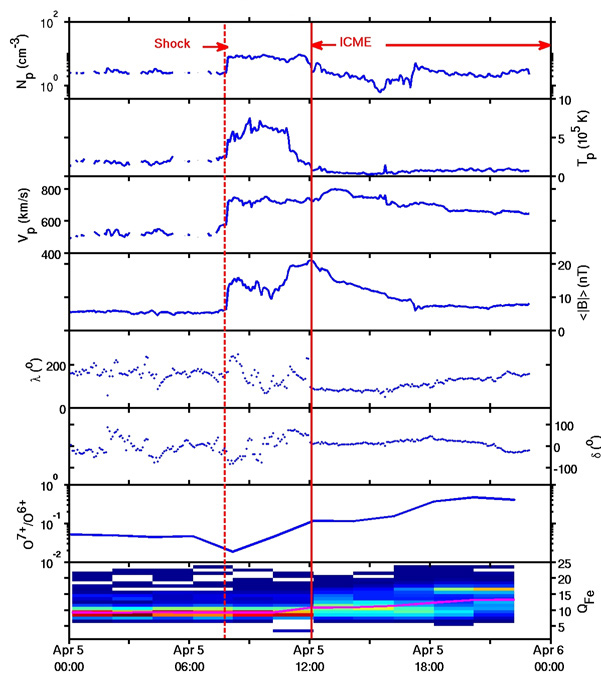 In one of the first and most violent solar eruptions since the Sun's recent ultra-low activity, a CME left the Sun at April 3rd and lit up space weather alarms at ACE and also on Earth. This ICME arrived on April 5th, 2010 at the Earth. It sparked geomagnetic storms that produced impressive Aurora Borealis. The figure at left shows solar wind parameters from ACE SWEPAM (Np, Vp, Tp), MAG (|B|, λ, δ), and SWICS (O7+/O6+, charge states of Fe) for this ICME. The Solar Wind Ion Composition Spectrometer (SWICS) has provided unprecedented solar wind compo-sition data inside and near ICMEs, thereby constraining their origin and evolutionary history. Among other things, SWICS has provided some of the best ICME signatures available to the research community.

Several interesting characteristics are worth noting in the figure. The ICME begins with a shock (dashed vertical line) around 0800 UT on April 5th. The main part of the ICME is characterized by low proton temperatures (Tp), enhanced magnetic field strength (|B|), and smoothly rotating magnetic field directions in longitude and latitude (λ, δ). These characteristics indicate that this ICME has a coil-shaped magnetic field signature (a "flux-rope") typical of so-called magnetic clouds (MCs).

Also of interest are the enhanced charge states of oxygen (O) and iron (Fe). The O7+/O6+ ratio increases inside the ICME, as does the average charge state of Fe (the magenta line in the bottom panel). The behavior of these charge states indicates a connection of the initial CME at the Sun with hot spots in the corona, perhaps related to the reconnection of magnetic fields associated with a flare. Indeed, there was flare activity present when this eruption occurred at the Sun.

The time evolution of the charge state distribution of Fe is shown as an intensity plot in the bottom panel. Here, we can see that the Fe ions become more ionized coincident with the arrival of the MC, with the charge state distribution becoming bimodal after approximately 1600UT. The characteristic Fe16+ appears at this point and continues towards the rear boundary of the ICME, which appears beyond the bounds of the plot. It is also interesting that the shock created by this ICME was still accelerating solar energetic particles (SEPs) when it arrived at Earth. These SEPs were observed by three energetic particle instruments on ACE.

Hence, it appears that the Sun is back to its old tricks, spewing out hot, energetic material from the Sun again at speeds great enough to create a shock and accelerate SEPs. After a long delay space scientists look forward to resuming studies of solar eruptions and their effects in interplanetary space and on Earth.

This item was contributed by Sue Lepri, Jim Raines and Thomas Zurbuchen from the University of Michigan Solar and Heliospheric Research Group. Address questions and comments to