Because of their proximity and frequency, solar flares offer one of the best natural laboratories for studying the acceleration of charged particles to high speeds. Direct imaging of these particle source regions high in the corona remains elusive because of the low densities and short time scales involved. Instead, these regions are studied indirectly, by studying the particles that escape from these regions either downwards into the solar surface or upwards into interplanetary space. The downward-going electrons emit bremsstrahllung X-rays as they slow down in the dense chromosphere, and downward-going ions produce γ-rays. Recent X- and γ-ray observations have shown that the locations where the downward-going electrons and ions impact the solar surface are frequently offset from each other by tens of thousands of kilometers, suggesting a spatial offset in the source or some mechanism which separates ions from electrons during transport to the solar surface 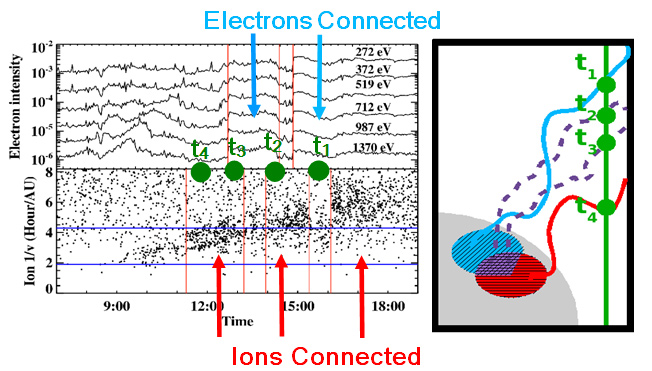 We have studied this offset in the upward-going particles, which escape into interplanetary space and can be observed by SWEPAM (electrons) and ULEIS (ions). These particles follow magnetic field lines, so as a spacecraft alternately observes field lines connected and not connected to the source region for a particular particle species, it alternately sees particle intensity and particle intensity dropouts. In the left portion of the figure, we show SWEPAM electron intensities (top) and ULEIS ions (bottom) as a function of time, with intervals when the spacecraft was magnetically connected to each source region marked with arrows. These ions and electrons have the same speeds (the electron speed range is marked in blue on the ion plot), so they should reach ACE at the same time if injected onto field lines simultaneously. In this event on 12 May 1999, at certain times ACE saw only electron intensity (t1), only ion intensity (t4) and both ion and electron intensities (t2 & t3). The lack of simultaneity in the ion and electron dropouts indicates that the source regions for these two species were offset, perhaps as diagrammed in the cartoon on the right. The field lines mix between the source and L1 due to random solar convection. By using this convective speed and the travel time to ACE, we determine the source regions were offset by no more than 100,000 km. The agreement between the offset in ion and electron source regions measured by interplanetary particles and X- and γ-ray observations provides new challenges for models of the geometry of particle acceleration in solar flares.

This item was contributed by Eileen Chollet of Caltech, and by Ruth Skoug and John Steinberg of Los Alamos National Laboratory. Address questions and comments to