Using Ionic Charge States as a Thermometer in the Solar Corona 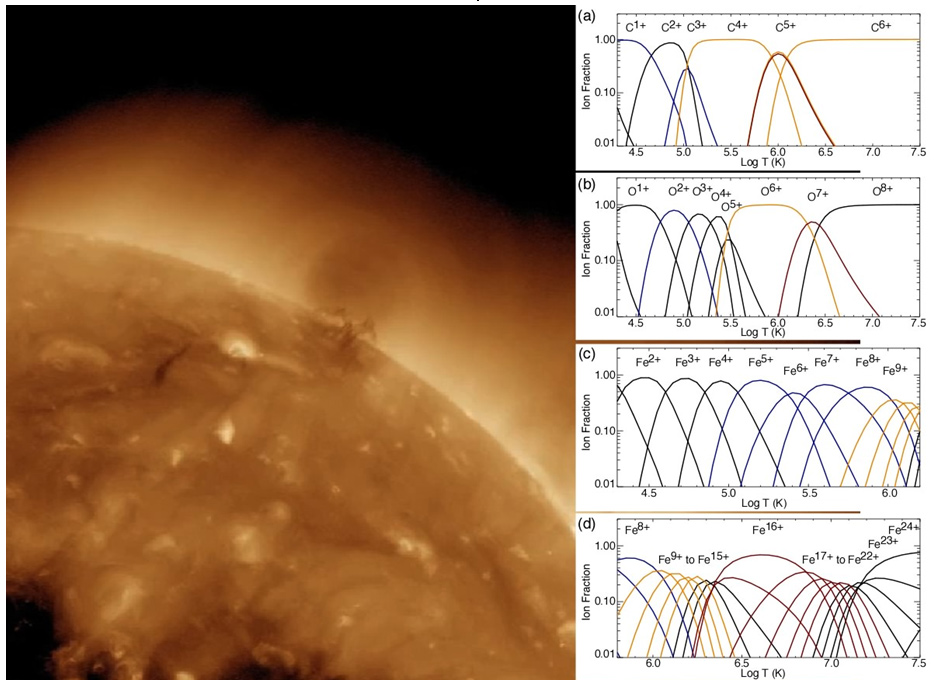 Temperature dependence of the charge states of carbon (a), oxygen (b) and iron (c and d), from the CHIANTI database. We highlight the three basic types of plasma output from the Sun identified by Lepri & Zurbuchen (ApJL 723, L22, 2010): "normal" solar wind (yellow), cold ICMEs (blue), and hot ICMEs (red).

ACE provides a unique and very powerful dataset to measure the thermal conditions of plasma originating in the corona and in the heliosphere. These data can be applied to the study of plasmas in the quasi-stationary corona, in coronal mass ejections, and even in ejected prominence material from the Sun.

As the solar wind plasma is accelerated into the heliosphere, its density decreases very quickly with radial distance from the Sun, effectively shutting down ionization and recombination processes. As a consequence, the plasma ionization state "freezes-in" and the solar wind ion composition retains a memory of the physical properties of source plasmas very close to the Sun.

In-situ measurements of charge states and charge state ratios of many elements therefore provide a powerful tool to determine the temperature of the plasma where those charge states froze in. These tools can be applied to any plasma outflowing from the Sun - "normal" solar wind and interplanetary coronal mass ejections (ICMEs).

In the solar corona, charge states are determined by the interplay of ionization and recombination for each ion, whose rates are strongly dependent on the local electron temperature. Temperatures in the source regions of the solar wind can be deduced by comparing observed charge state ratios with theoretical values calculated as a function of the electron temperature. Since each ion freezes in at a different height in the solar corona, different ratios give insight into plasma conditions at different heights along the path of ICMEs and solar wind.

These data are routinely measured by ACE-SWICS and are made available through the ACE Science Center.