Active Reconnection by a Quiet Sun 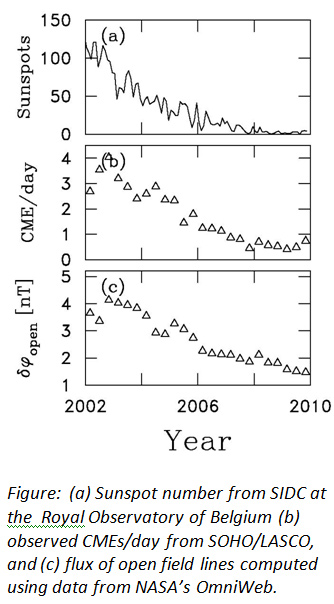 The recent protracted solar minimum has often been characterized in print and conversation by descriptions of an unusually quiet Sun with little or no activity. While it is true that there was a noticeable absence of sunspots and large ejecta, less dramatic flows persist as does the current sheet with small-scale current sheets forming across the disk.

At the same time the interplanetary magnetic field (IMF) is observed to be steadily dropping in intensity throughout solar minimum. Detailed analysis can associate the IMF intensity reduction to the elimination of open field lines. In hindsight, this is obvious, as the injection of new, closed field lines via eruption of coronal mass ejecta was negligible. Therefore, any reduction in IMF intensity must be associated with open field lines.

Panel (a) of the Figure shows the sunspot number as a function of time as the Sun passes from solar maximum into the declining phase and the protracted solar minimum. Panel (b) shows the recorded rate of CME ejection by the Sun, which is seen to drop over the time in question. Panel (c) shows the computed reduction of open field line flux as a function of time during the declining phase of solar activity. Four-month averages are computed and uncertainties are generally smaller than the symbol used. There is a broken slope character to panel (c) wherein the decline of open field lines is steepest when CME activity is stronger and then becomes shallower once CME activity is significantly reduced. Since the Maunder minimum is thought to have possessed a significant IMF, we conclude that the reduction of IMF open flux would have ceased had the protracted minimum continued for a few more years.

We know of no dynamics that can accomplish this reduction other than magnetic reconnection below the Alfven critical point. This permits the ejection of previously open, now closed, field lines while forming photospheric loops that can be subducted, leading to the reduction of photospheric fields. During this past minimum, the IMF flux reached the lowest level recorded for measurements in the space age.

This analysis is unable to determine the latitudinal location of the reconnection sites or their steady versus impulsive nature.