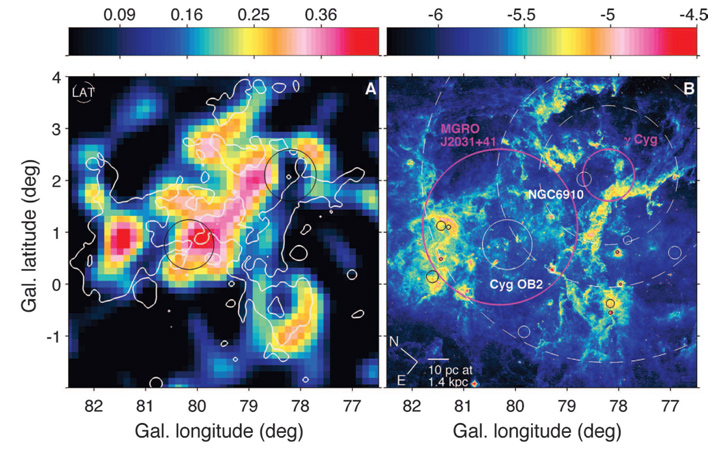 Figure: Panel A shows the distributed γ-ray emission in photon counts/bin from the Cygnus X superbubble obtained by Fermi. White contours are the 10-5.6 W/m2/sr contour of the 8-micron intensity. Panel B shows the 8 micrometer map (in W/m2/sr) of the same region with circles for 7gamma;-Cygni and stellar clusters (Ackermann et al. Science 334, 1103, 2011).

Measurements of the isotopic abundances of galactic cosmic rays (GCR) by the ACE/CRIS instrument have been shown to be consistent with a model in which the source of accelerated material consists of a mix of ~20% massive star outflow (including Wolf-Rayet star outflow and supernova ejecta) and ~80% normal interstellar medium material with solar system abundances (ACE News #74, #95 & #102; Binns et al. Space Science Reviews, 2007). These observations have led to a model of galactic cosmic ray origin in which associations of massive stars (OB associations) and their associated superbubbles are both the source of the material and site of the acceleration for a substantial fraction of GCRs. In addition, combined measurements of GCR elemental abundances by the balloon-borne TIGER instrument, HEAO-3, and by the ACE-CRIS instrument from carbon to strontium (Z = 6 to 38), have shown that the ordering of these abundances by mass (atomic weight) relative to a reference population is greatly improved if they are compared to a ~20/80% mix instead of normal solar system abundances. The element comparisons are completely independent of the isotope results, but lead to the same conclusion.

Recently, investigators from NASA's Fermi Large Area Telescope (LAT) have reported distributed γ-ray emission from 1 to 100 GeV in the Cygnus X region of the sky (Ackerman et al. Science 334, 1103, 2011). They identified a "cocoon" of freshly-accelerated cosmic rays that extends ~50 parsecs from the Cygnus OB2 association to γ-Cygni. The Cygnus OB2 association is a very large cluster of >500 massive stars and γ-Cygni is a young (age ~7000 years) supernova remnant. NGC 6910, an open cluster containing ~75 massive stars, is also near γ-Cygni. The γ-ray emission is most intense in Cygnus OB2 and γ-Cygni. The hardness of the γ-ray spectrum, created by π0 decay, indicates that the protons left the accelerator only recently. After subtracting a modeled background emission spectrum, including point-source emission from γ-Cygni, most of the remaining distributed emission extends along a line from Cygnus OB2 to NGC 6910, with peak emission coming from those stellar clusters. The morphology of the enhanced emission region corresponds to the edge of the Cygnus superbubble. Although the emission spectrum could result from either proton or electron acceleration, higher-energy (~1013 eV) Milagro γ-ray observations of this region are inconsistent with electron emission, thereby favoring proton acceleration. Either way, the γ-ray spectrum presents compelling evidence of freshly-accelerated cosmic rays within a superbubble. Thus, the Fermi observations identify a specific superbubble where cosmic rays are accelerated, while the ACE, TIGER, and HEAO-3 observations identify OB associations and their superbubbles as a class of astrophysical objects in which cosmic rays originate (for additional information, see W. R. Binns, Science 334, 1071, 2011).

The Fermi observations, taken together with ACE, TIGER, and HEAO-3 elemental and isotope measurements, give a consistent story that OB associations and their superbubbles are very likely the source of a substantial fraction of galactic cosmic rays. Continued studies of cosmic-ray composition and γ-ray observations of OB associations offer a rich potential for understanding the detailed nature of cosmic ray origin. This item was contributed by This item was contributed by W. R. Binns of Washington University, St. Louis. Address questions and comments to