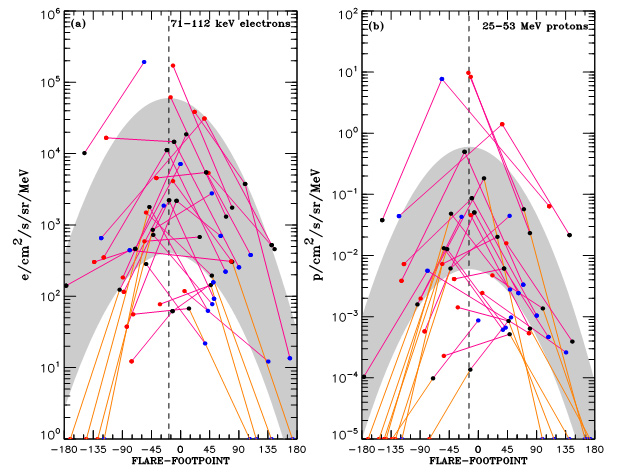 The current fleet of spacecraft distributed throughout the inner heliosphere allows the study of solar energetic particle (SEP) events during the rising phase of solar cycle 24 from multiple vantage points (see ACE News #139). Simultaneous observations of SEP events by ACE, SoHO and the two STEREO spacecraft allow us to estimate the longitudinal dependence of peak SEP intensities. We selected 26 SEP events observed during the 3-year period 2009-2011 for which (1) a 25-53 MeV proton intensity enhancement was detected; (2) a 71-112 keV electron intensity enhancement was observed by at least two spacecraft; and (3) a solar origin (i.e. solar flare and/or filament eruption) has been confidently identified.

Figure 1 shows (a) the 72-112 keV electron and (b) the 25-53 MeV proton peak intensity observed in these events by ACE or SoHO (black dots), STEREO-A (red circles) and STEREO-B (blue circles). Horizontal axes show the longitude difference between the parent solar event and the footpoint of the nominal magnetic field line connecting each spacecraft with the Sun (assuming a Parker spiral with a 400 km/s solar wind speed). The magenta lines connect events simultaneously observed by two or three spacecraft. The orange lines connect events observed by three spacecraft, but in which one of the spacecraft did not detect any particle increase (artificially plotted in the low horizontal axes of the Figure).

As solar cycle 24 progresses we expect a large number of SEP events that will increase the statistical significance of the results of the study.

This item was contributed by David Lario and Edmond C. Roelof of the Johns Hopkins University Applied Physics Laboratory. Address questions and comments to