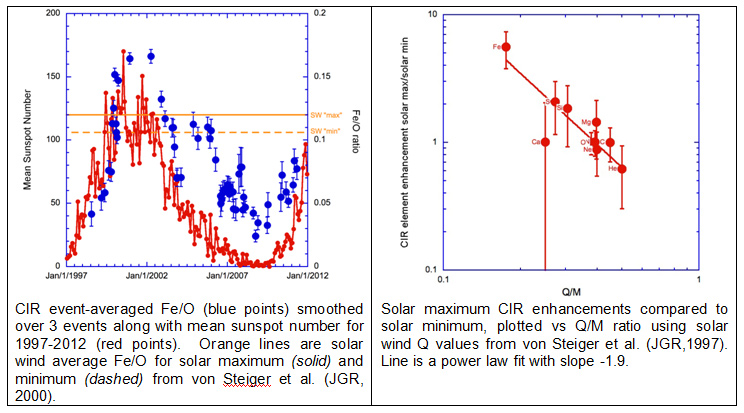 Corotating Interaction Regions (CIRs) arise from the interaction of fast- and slow-solar wind streams, and can energize particles to a few MeV/nucleon and sometimes even higher energies. The heavy ion composition of CIRs has long been known to generally resemble the solar wind; however, observations on ACE and Ulysses showed abundances of rare components He+ and 3He far in excess of the solar wind values. These rare tracers provide evidence that suprathermal tail particles are a source material since these rare ions are found in the suprathermal population as pick-up-ions and solar flare remnants. This leaves open the question of whether the dominant heavy ion seed population is from the bulk solar wind or suprathermal ion pool.

To investigate this we extended our previous ACE/ULEIS survey of CIR heavy ion abundances and spectra to cover the 1998-2011 period including the onset of the new solar cycle. We find that the solar minimum CIR intensities and spectral forms are similar to those in active periods, indicating that the basic acceleration mechanism does not vary with solar activity for energies below a few MeV/nuc. However, the heavy ion abundances show a clear correlation with sunspot number (Figure, left panel), where heavy ions are more enhanced during active periods. Over the mass range He-Fe, the enhancement is organized by a power law in Q/M with exponent -1.9, with Fe/O varying by a factor of ~6, as shown (Figure, right panel). These observations are evidence that in addition to rare He+ and 3He the CIR major heavy ion species are accelerated out of the suprathermal ion pool, not the bulk solar wind. This is consistent with a scenario where heated solar wind enters the suprathermal ion pool where it mixes with other constituents such as rare tracer ions or remnant solar energetic particles, etc., and this forms the seed population for further acceleration in CIRs. The mechanism producing the suprathermals apparently has a solar cycle dependence which is responsible for the abundance properties we have observed. For additional details, see Mason et al., ApJ (Letters), 748, L31, 2012.