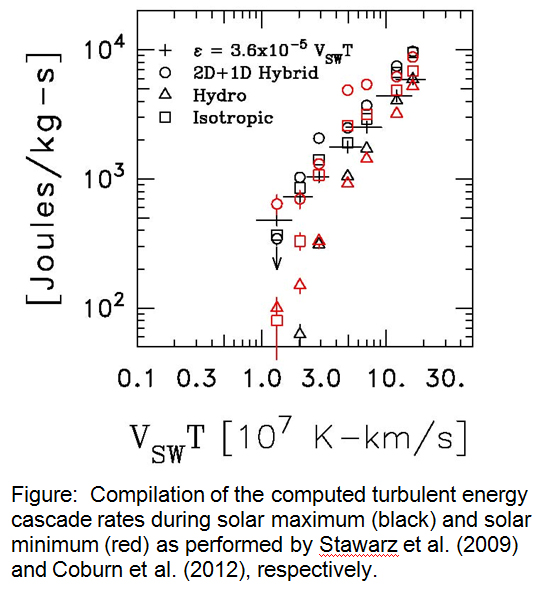 For some, the recent protracted solar minimum was a time of inactivity. Solar activity was low, energetic particle events were seldom, and the solar wind was settled into the predictable periodicity of Corotating Interaction Regions (CIRs). However, for others it was a chance to ask questions and resolve physics that is otherwise obscured by transient activity. For instance, in ACE News #142 we described a study of the solar wind that revealed strong evidence of ongoing magnetic reconnection below the Alfven critical point that was causing the Sun to shed magnetic field even though there was relatively little transient activity. Likewise, here, we can perform a study of solar wind turbulence and ask the question "Is the solar wind flow turbulent when the sources are quiet and there are few in situ large-scale shears to drive a turbulent cascade?" This question takes us back to the early days of space physics when the prevailing view of fluctuations in the interplanetary medium was that of Alfven waves propagating from source to termination region with little change in their dynamics.

We use the techniques of third-moment theory as described in ACE News #130. The turbulent cascade transports energy from large to small scales where dissipation in some form (in the solar wind it is probably some combination of cyclotron and Landau damping plus current sheet formation) converts the energy of collective fluid motions into heat. The heating of the background protons is well-established and quantified by Vasquez et al. [2007] at 1 AU as εP = 3.6 x 10-5 VSWTP where VSW is the wind speed and TP is the proton temperature. Kolmogorov [1941] derived third-moment theory for Navier-Stokes fluids while Politano & Pouquet [1998a,b] extended the idea to magnetohydrodynamics (MHD). When using spatial scales consistent with inertial range dynamics, and assuming an isotropic cascade model, the turbulent cascade can be described by D3 ±(L) = ⟨ δZ|| ±(L) | δZ±(L) |2 ⟩ = -(4/3)ε±|L|, where Z±(x) ≡V(x) ± B(x)/√(4πρ) are the Elsasser fields and Z|| is the component parallel to the separation vector L. In this formalism, the total energy cascade is given by ε=(ε+ +ε-)/2 which can be compared with the predicted value εP above.

In a recently submitted paper we compare the computed cascade rates using third-moment theory for the solar minimum years (red symbols in figure to right) to the cascade rates computed for solar maximum. We find little significant difference. Both under-estimate proton heating in the slow, cold solar wind and both obtain approximately equal values in the faster, warmer winds.

This item was contributed by Jesse Coburn, Charles Smith, Bernard Vasquez, Miriam Forman, and Joshua Stawarz of the ACE/MAG Team. Address questions and comments to