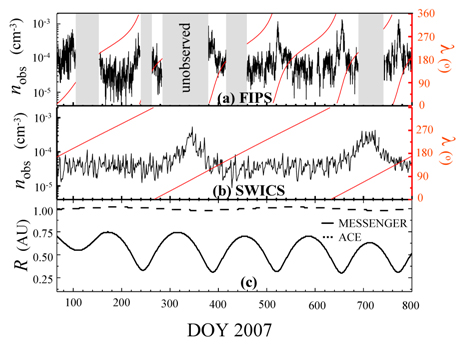 During its cruise orbit enroute to Mercury, MESSENGER traversed the gravitational focusing cone at 0.3 AU several times. During this time, the Fast Imaging Plasma Spectrometer (FIPS) sensor on MESSENGER made the first in situ measurements of pickup He+ inside Earth's orbit. These data are compared with analogous data collected by SWICS on ACE at ~1 AU. The bottom figure shows unscaled measurements of He+ during 2007-2009 for (a) MESSENGER/FIPS and (b) ACE/SWICS. In each panel the ecliptic longitude (λ) variation with time is also shown, as is (c) the radial distance of each spacecraft from the Sun.

An enhancement was clearly observed near the predicted downwind direction (≃ 75°) at all distances, with MESSENGER having passed through the cone once near R = 0.6 AU and then several times at R = 0.3 AU, and ACE traversing the cone yearly at R = 1 AU. We find similar structure in terms of downwind enhancement, cone width, and cone center directions for both MESSENGER and ACE observations, and find that these derived parameters are in good agreement with previous determinations of the direction of interstellar flow.

These new observations of the focusing cone at multiple heliocentric distances place strong constraints on any longitudinal transport of pickup He+ inside Earth orbit. This multi-spacecraft study therefore demonstrates that ACE/SWICS measurements at 1 AU serve as an excellent proxy for the longitudinal distribution of neutral helium in the inner heliosphere. For additional details, see Gershman et al. 2012, currently in revision for JGR-Space Physics.

This item was contributed by Dan Gershman, George Gloeckler, and Thomas Zurbuchen of the University of Michigan. Address questions and comments to