Since 2008, we have engaged a real-time automated routine to discover and alert the community to shocks in the solar wind passing by the ACE spacecraft. We use the ACE 1-minute resolution real-time data stream tracked by the NOAA network of receiving stations as input parameters to solve the Rankine-Hugoniot (R-H) equations. Using solar wind, magnetic field, and energetic particle data, our code is able to to reconstruct the compression ratio, speed, and normal direction of each shock without the need for human interaction. This is done within less than 10 minutes of the passage of the shock, allowing up to one hour of warning before interaction at Earth.

The R-H equations used are based on the model of a planar shock. Shocks driven by Interplanetary Coronal Mass Ejections are assumed to travel radially in our model, so the wind speed measurement provided by the real time data stream is taken to be radial. When examining the behavior of past events, we noticed that in many instances the peak speed of the ejecta driving the shock was greater than the speed of the shock front itself. It would appear at first glance as if the ejecta were in the process of overtaking the shock. However, this is resolved by examining the location of the measurement relative to the ejecta. These spacecraft crossings occurred away from the nose, so that the shock front only has to move fast enough to escape the flank of the ejecta rather than precede the bulk of the material. 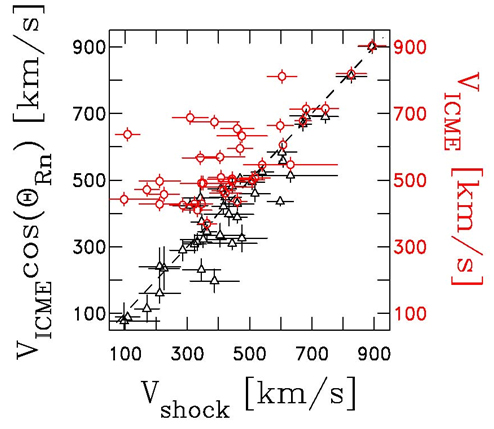 We analyzed 39 events which displayed this characteristic, with peak ejecta speeds attained anywhere from 2 to 12 hours after the passage of the shock, depending upon the standoff distance. The figure at right shows the original measurements of the peak ejecta speed versus the speed of the shock as determined by the R-H solutions by the red circles. This peak was chosen as having a significant duration within 15 hours of the calculated shock. The slowest shocks are observed as corresponding to much greater differences from their ejecta speeds than the faster events. The black triangles depict the peak velocity scaled by the radial component of the shock normal as determined by the R-H solution. The dashed line represents unity. Our computed normal directions bring the peak ejecta speed into agreement with the calculated shock speed within a reasonable degree of error.

This process is reversible, and has been incorporated into the current version of the automated routine, allowing us to predict the peak speed of the ejecta driving an encountered shock. While our previous iteration of the automatic routine provided us with one hour of warning, we now realize the potential of weaker shocks to serve as harbingers of fast-moving ejecta even farther downstream. Unfortunately, those events with the largest discrepancy in propagation speed are necessarily preceded by weaker flank-side shocks. We are therefore encountered with new challenges of resolving weak shocks portending significant ejecta from the anomalous fluctuations in solar wind activity. For additional information, see Paulson et al., Space Weather 10, S12002, doi:10.1029/2012SW000855 (2012).