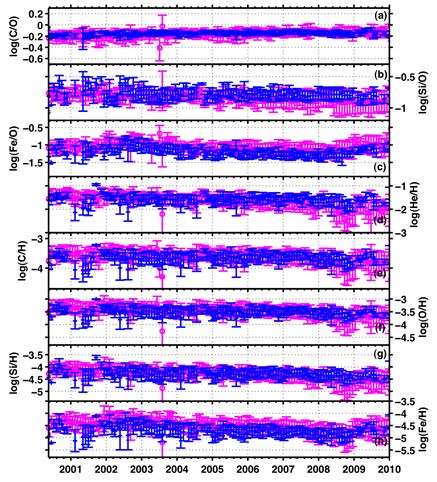 Using data from ACE/SWICS, we observe significant changes in the average solar wind composition and plasma properties on the time-scale of a solar cycle. We now know that the interplanetary magnetic field decreased by 30% between the last two solar minima, and that ionic charge states of O have been reported to change towards lower values in the fast wind. In a recently published analysis (Lepri et al., ApJ 768:94, 2013), we find a systematic change of C, O, Si and Fe ionic charge states towards lower ionization distributions. Most importantly, charge-state ratios in both the fast and slow wind decrease from solar maximum to solar minimum indicating a global decrease of electron temperatures in the corona. It is also likely that the density in the low corona decreased towards solar minimum.

The most surprising aspect of this analysis concerns the heavy ion content of the solar wind. We show that there was a ~50% decrease of heavy ion abundances (He, C, O, Si, and Fe) relative to H as the Sun went from solar maximum to solar minimum. The Figure shows Carrington-rotation-averaged elemental abundances relative to O and H. Slow solar wind data is shown in magenta and fast wind data is shown in blue in each of the panels. Panel (a) shows C/O, and (b) and (c) show Si/O and Fe/O, respectively. Panels (d)-(h) show the abundance of a specific heavy ion as compared to H and for increasing mass from He, C, O, Si, to Fe. All quantities are shown as log values. Both the fast and slow wind become more depleted in heavy ions at solar minimum with slow wind showing enhanced depletion as compared to fast wind. During this entire time, the relative abundances in the slow wind remain organized by their First Ionization Potential (FIP).

The fact that heavy ion abundances drop at solar minimum for both fast and slow wind suggests global changes in the processes that accelerate the wind or in the properties of loops that release plasma in the wind.

This item was contributed by by Micah J. Weberg, Sue T. Lepri and Thomas H. Zurbuchen of the University of Michigan. Address questions and comments to