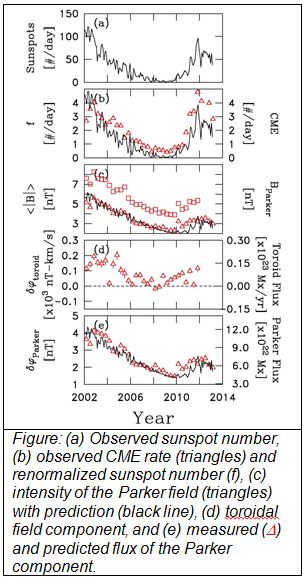 The recent protracted solar minimum (2006 through 2009) captured the solar community's attention for its uncharacteristically long periods without sunspots. In the solar wind, there were very few transients. Several papers were written that commented on the slow decline in solar wind parameters including the average wind speed, density, temperature, dynamic pressure, and magnetic field intensity and ACE was a leader in these analyses. Ulysses revealed the decline was a global phenomenon.

Several explanations have been offered for this behavior and some build on the constructs of Potential Field Theory. Others have suggested that the interplanetary magnetic field is the result of flux injection by transient Coronal Mass Ejections (CMEs) and flux removal by magnetic reconnection in the low solar atmosphere. With that have come analyses showing that the magnetic flux and solar wind flux are strongly correlated and thereby the reduced CME activity is suggested as a means of explaining decreases in both the magnetic field intensity and thermal ion flux in the interplanetary medium.

Building on the theory of Schwadron et al. [ApJL, 722, L132, 2010] and the observations by Connick et al. [ApJ, 727, 8, 2011], an analysis of ACE data by Smith et al. [ApJ, 775, 59, 2013] has shown that the magnetic flux at 1 AU during this time of low activity can be explained using the observed CME activity and reasonable choices for magnetic reconnection rates. They show that the renormalized sunspot number (f = 8/200 x SSN) can be used as a proxy for CME rates. Then using the observed flux content of the "average" CME as found by Owens [JGR, 113, A12102, 2008] they compute the flux injection by CMEs. Allowing for a constant timescale for flux removal by reconnection they are able to accurately reproduce the heliospheric magnetic flux for the past 38 years. Their analysis of the recent solar minimum is shown to the right. From the CME observations they predict the field intensity associated with the Parker component (triangles in panel (c)) and compare it with observations (black line) and total field intensity (squares) which is always greater than the Parker field intensity, but the excess does not contribute to the average flux of magnetic field. Toroidal field injection by CMEs (panel (d)) predates the rise in open field-line flux as expected. See Smith et al. (ApJ 775, 59, 2013) for more information.

If we are now past solar maximum, as many believe, the current low IMF strength should decline further due to low CME rates in coming years, likely resulting in a lower magnetic flux than was observed during the recent protracted minimum.

This item was contributed by Charles W. Smith, Nathan A. Schwadron, and Craig E. DeForest, on behalf of the ACE/MAG Team. Address questions and comments to