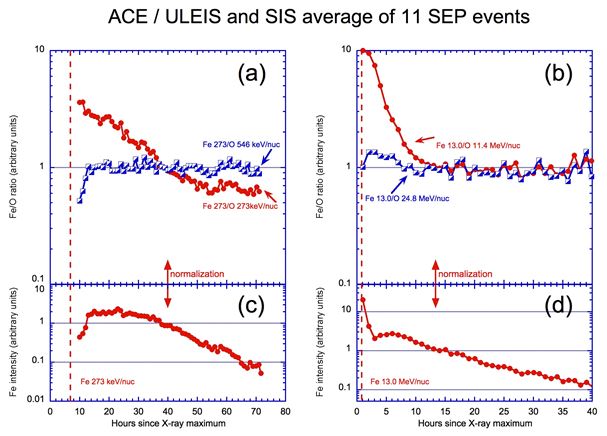 Decreases in the Fe/O ratio during solar energetic particle (SEP) event onsets are often observed and attributed to a variety of processes such as the acceleration mechanism, shock geometry, mixtures of particle populations, and interplanetary transport. Several studies have recently shown temporal changes such as in the Fe/O ratio are lessened or largely removed if particles are compared not at the same energy/nucleon but rather when they are compared at "scaled energies" where the O energy/nucleon is ~2x the Fe energy/nucleon. The figure shows these effects for 11 western hemisphere CME-associated SEP events, where the large decrease in the Fe/O ratio at a single energy/nucleon (red circles) is greatly lessened when Fe/O is computed at scaled energies (blue half-filled squares).

In order to explore the physical origin for this behavior, we modified the transport model developed by the Huntsville group to include adiabatic deceleration and non-isotropic distribution functions and compared the calculations with observations of 17 large western hemisphere solar energetic particle events. We find that energy scaling arises in cases where there is significant interplanetary scattering, so that the diffusion coefficient organizes the data, not the particle speed. Physically, the energy scaling arises from the slope of the interplanetary magnetic field turbulence spectrum and the differing charge-to-mass ratios of SEP ions. An important prediction of the model, that O/He will show similar behavior to Fe/O, was confirmed and is not predicted in particle mixture schemes. While other scenarios may occur, we conclude that Fe/O time variations during SEP event onsets are a transport effect in most cases. For additional details, see Mason et al., ApJ, 761, p. 104, 2012 and Astron. Soc. Pacific, in press, 2014.