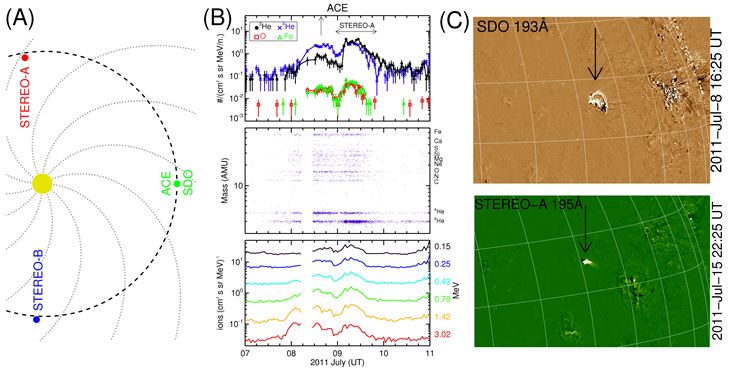 Since February 2011 STEREO-A and -B, along with near-Earth spacecraft (s/c), have provided for the first time a view of the full solar surface. This allows continual tracking of solar active regions (ARs) for their entire lifetime. With the advantage of a wide angular separation between the two STEREOs and the near-Earth ACE s/c, we report first time observations of multiple 3He-rich solar energetic particle (SEP) injections from the same AR for a relatively long time period lasting at least a quarter of a solar rotation. We identified two long-lasting 3He-rich SEP sources, one relatively large AR 11244, accompanied by B-class X-ray flares and another small, newly emerging AR 11246 near the border of a low-latitude coronal hole that produced numerous jet-like emissions. 3He-rich SEPs associated with AR 11244 were consecutively observed by STEREO-B on July 1 and ACE on July 8 and with AR 11246 by ACE on July 9 and STEREO-A on July 16. Previous single s/c observations showed such energetic ion bursts over relatively short time intervals (< one day) presumably due to loss of magnetic connection to the flare site. These new observations reveal that conditions for particle acceleration in a single solar region may pertain for a long time, implying that the processes are more continuous than previously thought. For further details see Bucik et al. Astrophysical Journal, Vol. 786, 71, 2014.