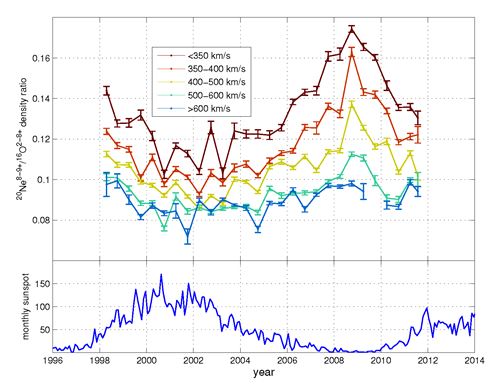 The measured Ne/O ratio as a function of time and proton speed during the observation period. Each point is the mean ratio observed over a 6-month interval in the specified speed range. The error bars give the standard deviation of the mean. Monthly sunspot number is plotted below.

Using in situ ion spectrometry data from ACE/SWICS, we have determined the solar wind Ne/O elemental abundance ratio and examined its dependence on wind speed and evolution with the solar cycle. We find that Ne/O is inversely correlated with wind speed, is nearly constant in the fast wind, and has a strong inverse correlation with solar activity in the slow wind. In fast wind streams with speeds above 600 km/s, we find Ne/O = 0.10 ± 0.02, in good agreement with the extensive polar observations by Ulysses/SWICS. In slow wind streams with speeds below 400 km/s, Ne/O ranges from a low of 0.12 ± 0.02 at solar maximum to a high of 0.17 ± 0.03 at solar minimum. These measurements place new and significant empirical constraints on the fractionation mechanisms governing solar wind composition and have implications for the coronal and photospheric abundances of neon and oxygen. The results are made possible by a new data analysis method that robustly identifies rare elements in the measured ion spectra. With the improved forward model we are now able to perform similar studies of elemental abundance ratios with respect to oxygen and hydrogen and their speed and solar cycle dependencies.

The observation that Ne/O is higher in the slow wind than the fast runs counter to the usual FIP fractionation pattern. Typically, if element X has a higher FIP than element Y, it is expected that the elemental abundance ratio X/Y will be depleted (that is, lower in the corona than in the photosphere). This depletion is expected to be greatest in slow wind. Wave-particle interactions are thought to be an important driver of FIP fractionation in the slow wind, and in recent Alfven wave-based FIP fractionation models, Ne/O is predicted to be more decreased in closed magnetic field regions of the corona, where slow wind originates, than in open field regions, where fast wind originates. Our data show the opposite trend, implying that either present wave-particle fractionation models are missing something important, or there is a stronger mechanism than wave-particle interactions which determines the Ne/O speed dependence. See Shearer et al., ApJ 789, 60, 2014, for additional information.

This item was contributed by Paul Shearer, Jim Raines, Susan Lepri, Jonathan Thomas, Jason Gilbert, Enrico Landi, and Thomas Zurbuchen of the University of Michigan and Rudolf von Steiger of the International Space Science Institute in Bern. Address questions and comments to