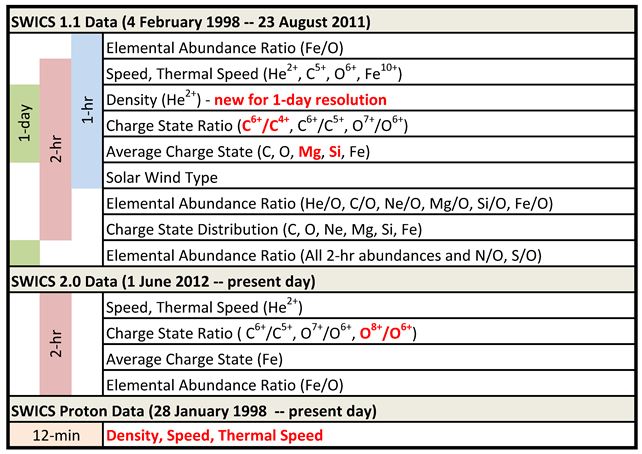 The Solar Wind Ion Composition Spectrometer (SWICS), as part of the ACE and Ulysses payloads, has revolutionized our understanding of the composition of the solar wind. After a brief commissioning period in 1997, ACE/SWICS has become the longest-operating composition instrument in flight, providing unprecedented elemental composition, ionic composition, and dynamic properties of 77 species in the solar wind.

To get the most value out of this investigation, the SWICS team has undertaken an improved analysis of all SWICS data, providing the most accurate and most complete data set available to the community. The new SWICS data are provided in two categories:

In addition, the SWICS proton measurements, which are captured in a separate instrument channel and were unaffected by the hardware anomaly, are now delivered at 12-minute resolution for the entire duration of the SWICS investigation.

The figure shows the SWICS data products that are now available from the ACE Science Center, with new data products shown in bold. In addition to these, a merged SWEPAM-SWICS solar wind proton data time series is continuing to be delivered as a Level 3 data product. Both the new and the recalibrated SWICS data, along with release notes explaining the analysis and recalibration, and the statistical guidelines for data usage, can be found at /ACE/ASC/level2/index.html.

This item was contributed by Jason A. Gilbert, Paul Shearer, and Thomas H. Zurbuchen of the University of Michigan. Address questions and comments to