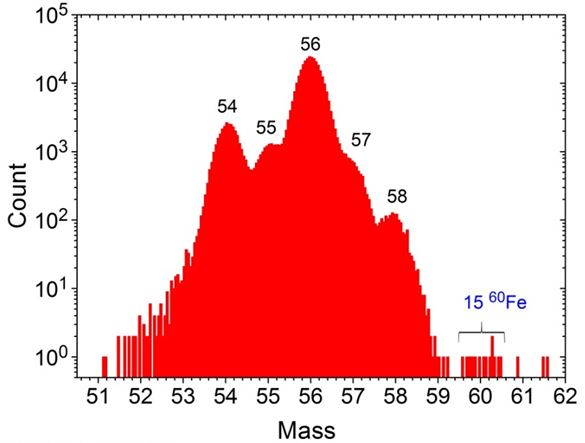 The remarkable longevities of the ACE spacecraft and of the Cosmic Ray Isotope Spectrometer (CRIS) on ACE have enabled detection of extremely rare isotopes in the Galactic cosmic rays. Using seventeen years of CRIS data, we have identified fifteen 60Fe nuclei in a data set that included nearly 300,000 of the common 56Fe nuclei.

Comparison of our observed abundance ratio of 60Fe/56Fe with the ratio predicted by various theoretical models of supernova nucleosynthesis demonstrates that a substantial part of the Galactic cosmic rays must be accelerated within a few million years of their nucleosynthesis. Earlier CRIS results (ApJ 523, L61, 1999) showing the absence in the cosmic rays of 59Ni (which decays with a half-life of 76,000 years, but only by capture of orbital electrons) demonstrated that cosmic-ray acceleration occurs at least 105 years after nucleosynthesis; and thus the supernova that synthesized the heavy elements is not the supernova whose shock accelerated them to cosmic-ray energies.

Taken together, the lack of 59Ni in the cosmic rays and the presence of 60Fe indicate that cosmic rays are accelerated in a region where at least two supernovae (one that synthesizes the heavy nuclei and another that accelerates them) occur within a few million years of one another. Most core-collapse supernovae occur in OB associations - clusters of massive stars - where supernovae occur roughly every million to two-million years (Sp. Sci. Rev. 130, 439, 2007). So the CRIS observation of 60Fe lends support to models in which OB associations are the source of a substantial part of the Galactic cosmic rays.

This item was contributed by Martin Israel and Robert Binns of Washington University in St.Louis. Address questions and comments to