In solar wind that is not dominated by collisions, we find traces of heating processes using the individual behaviors of heavy ions in the solar wind, which appear to be much, much hotter than solar wind protons and helium. 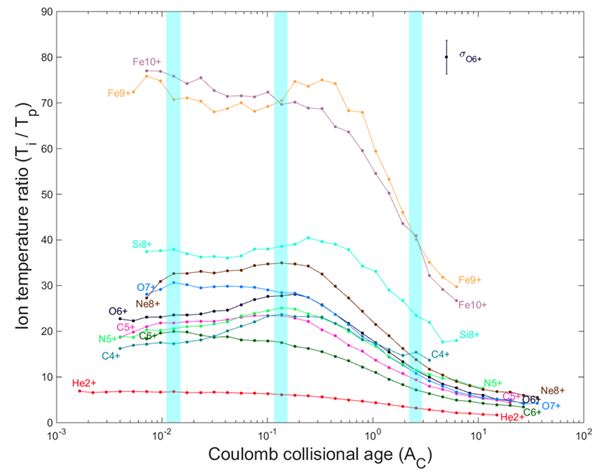 Figure 1: The median value of the ion temperature relative to that of protons, Ti/Tp, is plotted as a function of collisional age, AC, for several heavy ions measured in the solar wind. The median absolute deviation is shown as error bars for O6+ and is representative of the variability of that data for the other ions. Vertical highlighting indicates the different regimes of collisional age considered in this analysis.


Using data from ACE/SWICS, we find that the heating signatures in solar wind plasma are not consistent with proposed mechanisms that are related to the turbulent transport in fluids. However, for particles with mass/charge ratios <3.5 we find agreement with such models in partially collisional plasmas. The degree of collisionality is indicated by the collisional age, AC, a larger collisional age indicates that the plasma is thermalized to a greater extent, erasing any remnant signatures of heavy-ion heating it may have possessed.

If one only looked at protons and helium, the most important contributors to solar wind dynamics, one would not see these critical differences between data and theory and could erroneously conclude that a particular model correctly predicts the observed heating. This indicates the power of this new tool. See Tracy et al., Physical Review Letters, 116, 255101 (2016) for details.

This item was contributed by Patrick J. Tracy, Justin C. Kasper, Jim M. Raines, Paul Shearer, Jason A. Gilbert, and Thomas H. Zurbuchen of the University of Michigan. Address questions and comments to