On 28 August 2017, active region (AR) 12673 emerged on the solar disk; before rotating over the western limb it generated 27 M-class and 4 X-class flares, including the largest of solar cycle 24 (X9.3 on 6 September). Four coronal mass ejections (CMEs) with velocities >1000 km/s and widths >120° were launched from AR 12673, not surprisingly resulting in multiple solar energetic particle (SEP) events observed by near-Earth spacecraft. Of these events, that of 10 September was the largest seen since June 2015 (in >10 MeV proton peak intensities) and one of only two ground-level enhancement (GLE) events of the current cycle. GLE events are extreme SEP events which typically exhibit significantly harder spectra (on average E-3.18) at energies above ~40 MeV; this, combined with their large intensities of >50 MeV/nuc ions, makes GLE events extremely hazardous to exposed astronauts and space-based instrumentation. 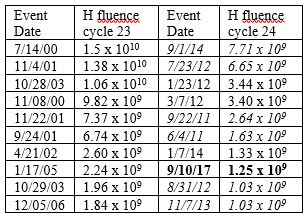 The two cycle-24 GLE events (10 September 2017 and 17 May 2012) are compared to the smallest (6 May 1998) and two of the largest (28 October 2003 and 14 Jul 2000) GLE events of cycle 23 in the left panel above. All the events have the typical broken power law spectra, but the 10 September event was softer than average above the spectral break (E-3.4). It is the combination of a relatively high break energy and unusually hard spectra below this break that results in the 100-MeV proton fluences of the 10 September event being within a factor of 4.5 of the largest GLE events of cycle 23. Although there has been a dearth of GLE events in cycle 24 compared to 16 in the previous cycle, the STEREO spacecraft have observed several extreme events away from Earth; at least two of which might have been GLE events if Earth had been co-located with STEREO at the time. These events, 1 September 2014 and 7 March 2012, are compared to the cycle-24 GLE events in the right panel and clearly have high-energy spectra harder and >80 MeV fluences higher than either of the two identified GLE events.

Although conditions during cycle 24 at times were conducive to the generation of extreme SEP events, overall the cycle has been significantly weaker than cycle 23 in production of large SEP events as indicated by the >10 MeV proton fluences. The table lists the top 10 SEP events for both cycles and their >10 MeV proton fluences (in cm-2). Even when the large STEREO events for cycle 24 (an asset which wasn't available in cycle 23) are included (as indicated with italics), the cycle 23 events were, on average, 2.4 times larger than those of the current cycle. How cycle 25 will stack up remains to be seen.

This item was contributed by C. M. S. Cohen and R. A. Mewaldt of Caltech Address questions and comments to