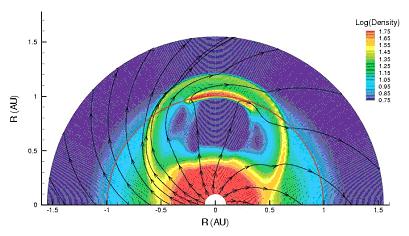 The interplanetary shock observed by the ACE spacecraft on DOY 197 of 2000, now associated with the Bastille Day event, offers two interesting properties. First, the shock compression ratio is very strong; and second, there is evidence that the spacecraft crossed the shock at > 30° from the nose of the disturbance. For those accustomed to planetary bow shock studies this seems remarkable. Planetary bow shocks exhibit a rapid decline in shock strength with increasing distance from the nose of the shock (referred to here as the longitude). This shock gives every impression of remaining strong over a wide region of the shock surface, perhaps even as far as 45° or more from the nose.

We have performed simulations of the shock and ICME driver with a snapshot of that solution shown to the left above. We use a 2-D MHD model to simulate the solar wind between 0.1 and 1.5 AU. At the inner boundary we assume a solar wind density of 1000 cm-3, velocity of 325 km/s, temperature of 106 K, radial interplanetary magnetic field (IMF) strength of 850 nT, and azimuthal IMF strength of 86 nT. The CME is introduced as a high-speed, high-density stream at the inner boundary spanning 30° of longitude for 1 hour. The resulting disturbance at 1 AU agrees well with the observations.

The figure (top, left) shows the ejecta crossing the 1 AU radius at about 40° longitude. The black lines mark the simulated IMF and the arc at 1 AU locates the Earths orbit. Although not evident in the figure, the ICME continues to expand into the surrounding solar wind, a property demonstrated also by the Bastille Day ICME and central to the results shown here.

We compute the shock compression (top, right) as a function of longitude off the nose of the ejecta as the shock crosses 1 AU and find that on the eastern flank of the shock (right side, a quasi-parallel geometry) the compression remains nearly maximum (4) until 50° of longitude. On the western flank, where the shock exhibits a nearly perpendicular geometry, the shock weakens more quickly, but remains relatively strong (compression > 3) for longitudes in excess of 50°.

Although the unusual observations of the Bastille Day 2000 shock serve only as the motivation for this study, it has been made clear that ICMEs can drive shocks that remain remarkably strong on the flanks when supported by expansion of the ejecta. One implication of this result is that the shock surface available for acceleration of energetic charged particles can be quite large, resulting in greater energization of the particles.