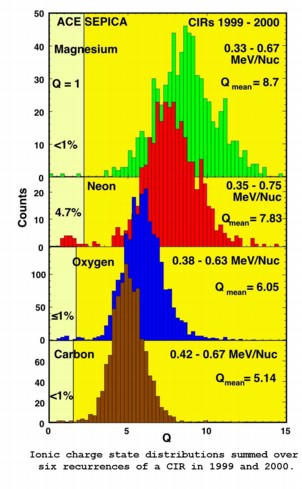 The ionic charge-state distributions of heavy ions in co-rotating interaction regions (CIRs) have been observed for the first time with the ACE/SEPICA instrument during a series of events in 1999 and 2000. CIRs are known to be efficient accelerators of particle populations in interplanetary space. Determining their elemental and ionic charge-state composition reveals important information about the sources that CIRs draw from. Among the candidates that have been proposed are the solar wind, where the typical charge states reflect coronal temperatures of ~1-2 million K, and singly-charged pickup ions from the “inner source” that is attributed to solar wind that has been absorbed and then re-emitted from dust grains near the Sun. Although not as abundant, pickup ions are expected to be accelerated more efficiently than the bulk solar wind because they are singly charged.

The Figure shows ionic charge state distributions summed over six CIR events in 1999-2000. The mean charge states of 5.14 (C), 6.05 (O), 7.83 (Ne), 8.7 (Mg), and 10.5 (Fe; not shown) most resemble those of the solar wind, and are also similar to those for solar energetic particles accelerated by shocks associated with coronal mass ejections. Detailed analysis of the charge distributions indicates that only Ne contains a small (4.7%), but statistically significant, contribution of singly-ionized Ne+, with no significant contributions of singly-charged ions to C, O and Mg. The Ne+ can be attributed to pickup ions from the neutral interstellar gas, and the relative amount is consistent with the efficient acceleration of interstellar pickup ions, similar to previous findings of a substantial abundance of He+ in CIRs. However, it is surprising that there is apparently no significant contribution of inner source pickup ions to C, O and Mg in CIRs at 1 AU. These observations contain valuable information about the relative acceleration efficiencies of source populations that have different effective temperatures. Compared with interstellar pickup ions, the inner source is already strongly cooled at 1 AU because it originates much closer to the Sun.

This finding deepens the puzzle created by recent observations that suggest that inner-source pickup ions contribute to elements such as C and Mg in anomalous cosmic rays (ACR) that are accelerated at the solar wind termination shock (at ~90 AU). It suggests that additional preheating and acceleration processes may occur in the outer heliosphere prior to the termination shock.

Submitted by Eberhard Möbius and Daniel Morris of the University of New Hampshire.