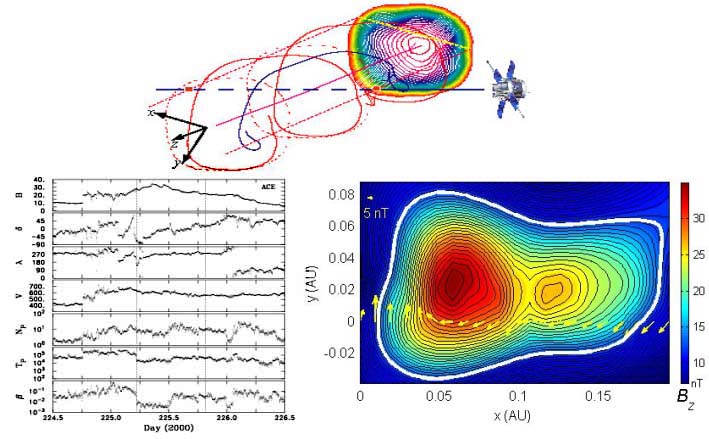 A recent study by Hu and Sonnerup [in press] showed that a magnetic cloud at 1 AU has the topology of a non-axisymmetric, cylindrical flux rope. As illustrated in the top panel, the method they employ to determine cloud geometry utilizes magnetic field and plasma data collected during the interval when the spacecraft passes through the cloud. A cross-section of the cloud, in the plane perpendicular to the axis (z) along which the structure has approximate invariance, is obtained from this single line of data.

For this event, the total axial magnetic flux and the total axial current bounded by the highlighted white contour line are 7.6 × 1012 T-m2, and 1.1 × 109 A, respectively. The axial current density near the center of the left and right flux ropes, where Bz reaches local maximum, is -4.2 × 10-12 A/m2, and -3.1 × 10-12 A/m2, respectively. This analysis self-consistently reveals unique 2½-D solutions with a single pass through one of these clouds without additional constraints.

Contributed by Qiang Hu and the ACE MAG Team at the University of Delaware.