Energetic He+: The 3rd Most Abundant Ion - Source and Acceleration 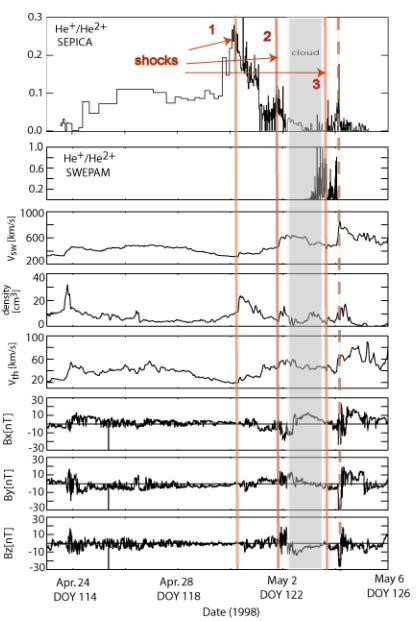 A systematic survey of the ionic charge state composition of 0.25 - 0.8 MeV/nuc energetic helium with the ACE/SEPICA instrument reveals that, after H+ and He2+, He+ constitutes the third most abundant ion in the inner heliosphere in this energy range. The average abundance during 1998 - 2000 has been determined to be He+/He2+ = 0.06, with substantial variability and maximum values approaching unity.

Such unusually high abundances and strong variations of the He+/He2+ ratio were first reported by Hovestadt et al. in 1984. It was suggested that flares and associated coronal mass ejections may cause the variability, and prominence material could be the major source for energetic He+. However, only on very rare occasions have significantly enhanced He+/He2+ ratios as large as 0.1-0.3 been observed in the solar wind containing prominence material. The high average He+ abundance cannot be explained with those rare events. Even in such an event, as shown in the Figure, the cold solar material with high He+ abundance does not appear to contribute significantly to He+-rich energetic particles. Shown at right from top to bottom are the He+/He2+ ratio at 0.25-0.8 MeV/nuc, the He+/He2+ ratio at solar wind energies from ACE/SWEPAM, the solar wind bulk speed, density, and thermal speed, and the magnetic field components for April 24 - May 6, 1998. Three shocks (full red lines) and a large forward-traveling wave (red dashed line) are present during this time interval. Upon arrival of the first shock on April 30, a large enhancement in the energetic He+ population is observed. A less pronounced enhancement is also observed at the second shock, driven by the CME. Within the cloud, a high He+/He2+ ratio is seen at solar wind energies, but no significant enhancement is observed in the energetic population. A rather moderate enhancement occurs in the later part of May 3, at the third shock, presumably overtaking the cloud.

This observation emphasizes that prominence material, present inside the cloud, is not being accelerated to higher energies. Therefore, the only viable source for the energetic He+ is thought to be singly-charged interstellar pickup ions, which, compared to cold solar wind ions, are known to be preferentially injected into shock acceleration. The observed variability has to do with local acceleration at specific interplanetary structures, such as shocks. This seems to solve a long-standing puzzle in energetic particle studies.

Contributed by Harald Kucharek and Eberhard Mobius of the University of New Hampshire and Ruth Skoug of Los Alamos National Laboratory.