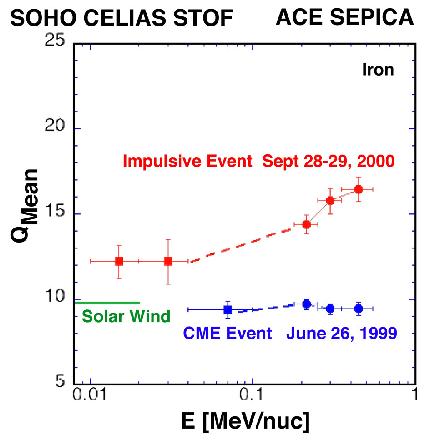 Impulsive solar energetic particle events are well known for their dramatic over-abundances in 3He and heavy ions. ACE observations have extended these composition peculiarities to overabundances in the heavy isotopes of Ne and Mg. Possible mechanisms that might explain the observed elemental and isotopic fractionation patterns are still hotly debated, but are thought to be related to the mass-to-charge (M/Q) ratio of the ions during the injection and acceleration process. Therefore, the measurement of ionic charge states in these events is expected to be a key observation. The first charge-state measure-ments of impulsive events, averaged over all such events observed during one year with ISEE ULEZEQ, suggested that impulsive events feature rather high charge states with Q ≈ 20 for Fe and all elements up to Mg essentially fully stripped. These high charge states appeared to be well separated from the group of large, CME-related events with Q ≈ 14 for Fe.

With ACE SEPICA we have found that solar energetic particle events generally show a wide variety of mean charge states for Fe ranging from Q ≈ 10 continuously up to Q ≈ 20. Also, element abundance ratios appear to correlate with the ionic charge states (see ACE News #33). These two results seemed to present a puzzle, as the highest overabundances of heavy ions were observed for events with essentially fully-ionized ions up to Mg, which would not lend itself to an M/Q-based explanation for the observed fractionation. Therefore, it was suggested that fractionation and acceleration occur among lower charge state ions, with the final high charge states attained through stripping. This idea appears to be corroborated now by the observation of a very strong energy dependence of the iron charge states from 0.2 to 0.5 MeV/nuc with ACE SEPICA, a pattern that is even more pronounced when extended to ~0.01 MeV/nuc with the SOHO CELIAS STOF instrument. The Figure shows the charge state of Fe as a function of energy for an impulsive event in September 2000 in comparison with that for a CME-related event in June 1999 and the charge state of adjacent solar wind. Whereas the CME-related event shows Q ≈ 10 over the entire energy range, commensurate with that of the solar wind, in the impulsive event the charge state increases from Q ≈ 12 at low energies up to Q ≈ 17 at 0.5 MeV/nuc. This observation suggests that the original source material which is accelerated in these events has a much lower temperature than previously thought and is only partially ionized, thereby lending itself to M/Q fractionation. The sharp increase of the charge state with energy can be explained by electron stripping that increases with energy. This also implies that the acceleration in impulsive events occurs in the lower corona. The observed variation in heavy ion abundances from event to event may point to differing charge states at the low energy end.

Contributed by Berndt Klecker of the Max-Planck-Institut fur extraterrestrische Physik, Garching, Germany, and Eberhard Moebius of the University of New Hampshire. Comments and questions should be addressed to the authors.