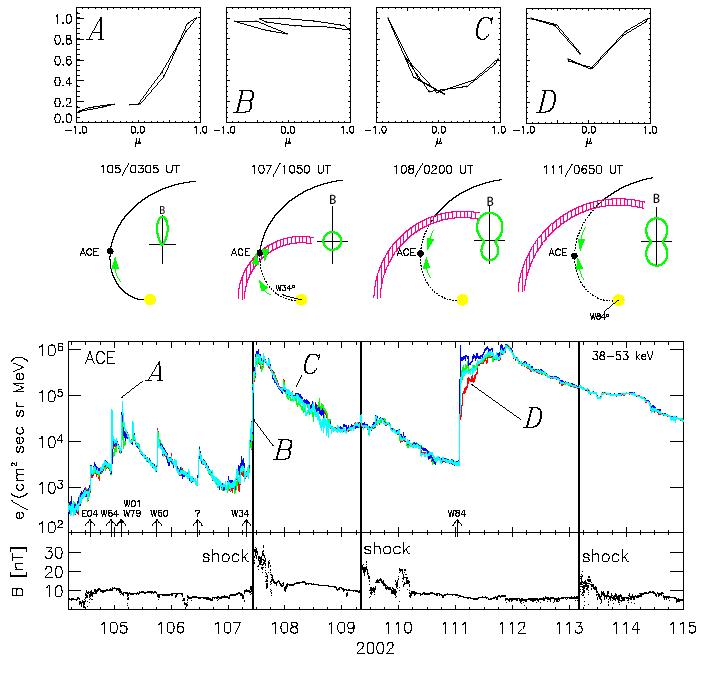 During the 10 days of the STORMS study period in 2002, a series of solar flares from a compact group of active regions produced a sequence of both coronal mass ejections (CMEs) and near-relativistic (>30 keV) electron events as the active regions rotated from central meridian to over the west limb of the Sun. In the time plots above, electron intensities measured in four different directions by ACE/EPAM are plotted in different colors to reveal the presence of anisotropy in the directional intensity, and their time history can be related to the CME's characteristic compressions in the interplanetary magnetic field, B(nT).

(A) The earliest electrons were injected when the field lines connecting the Sun and Earth were relatively undisturbed (CME-free). Therefore the electron intensity profiles are very spiky with rapid intensity decays, and their pitch-angle distributions (PADs) are strongly beam-like along the local magnetic field, as sketched in the middle panel (where the PADs are represented by a polar plot). The upper panels show the PADs (normalized to the maximum directional intensity) displayed as a function of the cosine(μ) of the pitch angle.

(B) Just before the first CME hit the Earth at 1021 UT on day 107 (April 17), a halo CME occurred at ~0826 UT producing a major electron event at ACE. Even though the intensity increases dramatically, the rise is not nearly as spiky and the PAD remains isotropic because the field compression immediately reflects the electrons by magnetic mirroring.

(C) Fifteen hours later in the now-decaying event, the bulk of the electrons are still streaming anti-Sunward along the field line (μ ≈ -1, because B now has inward polarity). Back-scatter due to mirroring at the CME (now only ~1/5 AU beyond Earth) is now evident in the Sunward streaming electrons (μ ≈ +1).

(D) After an additional (compound) CME passed Earth on days 109-110, a flare near the Sun's west limb produced another large electron event early on day 111 (April 21). The electron streaming is initially anti- Sunward during the very sharp rise, but in less than an hour the PADs become bi-directional, revealing near perfect mirroring from the compound CME that is ~2/3 AU beyond Earth. This magnetic confinement is evidenced by the very gradual intensity decay over the following four days. Thus, during 14-24 April the Sun graphically demonstrated how CMEs control energetic electron propagation in interplanetary space.

Submitted by Edmond C. Roelof, David Lario, and Dennis K. Haggerty of Johns Hopkins University in Laurel, MD. Questions or comments can be addressed to Edmond.Roelof@jhuapl.edu.