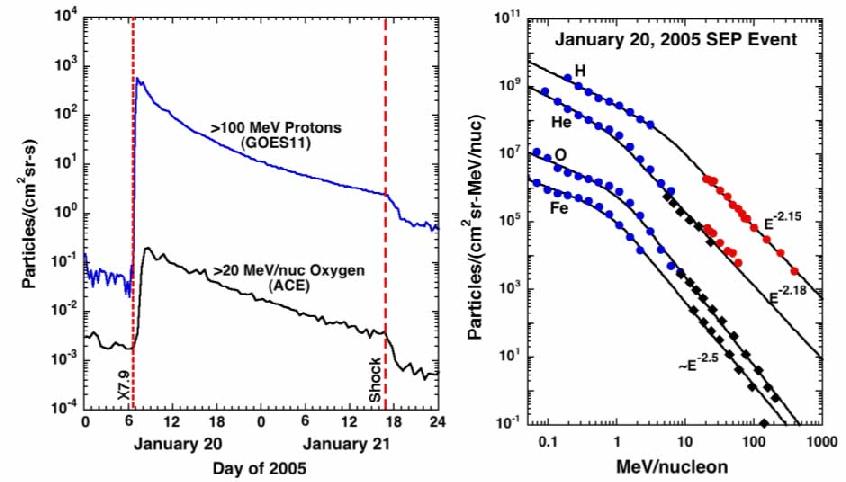 The solar energetic particle (SEP) event of January 20, 2005 has been called, by some measures, the most intense in 15 years, with a >100 MeV proton intensity comparable to that of the October 1989 event. This event was also the largest ground-level neutron monitor event in years, providing evidence that protons were accelerated to energies of several GeV. Data from instruments on the ACE and SAMPEX spacecraft have been used to measure the fluence spectra of H, He, and heavier nuclei over the energy range from ~0.1 to several hundred MeV/nucleon, as shown in the right-hand figure above. Included are data from the ULEIS and SIS instruments on ACE (blue circles and black diamonds, respectively) and the PET instrument on SAMPEX (red circles). Note that the proton spectrum extends as a power-law to at least 400 MeV, while the Fe spectrum shows evidence of a spectral break above ~100 MeV/nucleon. During the first day all species from H to Fe had power-law energy spectra with indices of -2.2; in spectra above, which include data out to beyond the arrival of the interplanetary shock from this event, the O and Fe spectra have steepened somewhat to -2.5.

This event is particularly troubling from a space weather point of view for two reasons. First, the onset was extremely rapid, as shown above. Following an X7.9 flare that began at 6:36 UT on January 20, the intensity of >100 MeV protons measured by NOAA's GOES-11 spacecraft rose to their maximum intensity level within 1/2 hour. Indeed, observations of the associated CME were to a large extent lost because of solar particle background in the SOHO/LASCO CCD. The rapid onset is due in part to the fact that the event originated at W67 degrees, where there is expected to be relatively good magnetic connection with the Earth.

Secondly, this event had very hard energy spectra. During typical large SEP events the power-law portion of the proton spectra steepen between 10 and 100 MeV - the Jan. 20 spectrum extends as a power-law to at least 400 MeV. The very energetic particles in this event are difficult to shield against, and Frank Cucinotta of Johnson Space Flight Center estimates that an astronaut on the Moon, protected by only his spacesuit, would have received a radiation dose of ~300 rem, sufficient to cause radiation sickness. Thus, this event is an example of the challenges facing space weather forecasters once astronauts again venture outside the protective cover of Earth's magnetosphere.

Contributed by Richard Mewaldt, Christina Cohen & Allan Labrador of Caltech, Mark Looper of the Aerospace Corporation, and Glenn Mason of the University of Maryland. Address comments or questions to Rmewaldt@SRL.caltech.edu.