Determination of Dissipation Range Spectra in the Solar Wind 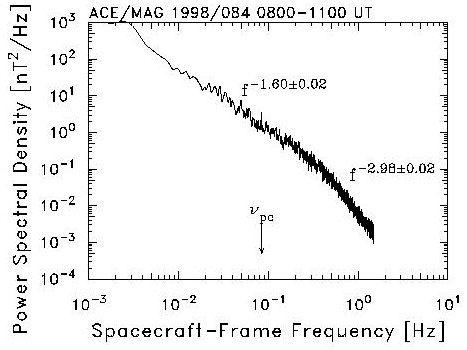 Using the well-developed theory of hydrodynamics to understand the magnetized solar-wind plasma has a long tradition and has proven to be very useful. In 1941 Kolmogorov predicted that a spectrum of hydrodynamic turbulence would be a power law with -5/3 index due to an energy-conserving cascade from larger to smaller spatial scales until dissipation mechanisms set in and remove energy from the system. This appears to be true for the spectrum of interplanetary magnetic field (IMF) fluctuations for frequencies of 10-4 to ~0.5 Hz, a regime referred to as the inertial range. In the case of IMF spectra, years of examination have shown the persistent steepening of the spectra near the proton cyclotron frequency, νpc (left). This spectral break marks the onset of dissipation mechanism(s) and the region above this is thus referred to as the dissipation range. This feature has been observed in IMF observations from Helios to Voyager and is routinely cited as evidence for cyclotron damping of Alfven waves, although there is controversy on this point.

In hydrodynamic theory, when the energy cascade rate increases, the dissipation regime moves to higher frequencies. However, this does not appear to occur in the IMF spectrum, as the break point remains fixed near νpc. One might expect that as the cascade rate increases, eventually the dissipation mechanism(s) begins to fail to remove energy from the system efficiently and more energy cascades into the portion of the spectrum above the break point, making it less steep. 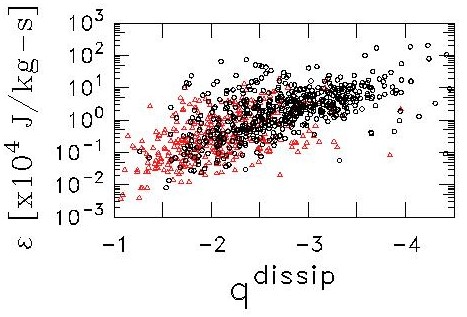 To investigate this we compiled IMF spectra for over 800 intervals of ACE/MAG observations, one to three hours in length, from 1998 through 2002. The spectrum (above) shows a typical example for one interval of open field lines. The spectral break is readily evident at 0.4 Hz and the functional fits to the inertial and dissipation range intervals are given on the plot. We compute the energy cascade rate, ε, for each interval (left) according to Kolmogorov's theory. The data base includes open field lines of all types (black symbols) and magnetic clouds (red symbols).

We find that the dissipation range power-law index, qdissip, scales with the rate of energy cascade through the inertial range. This indicates that as the cascade rate increases the dissipation mechanism(s) becomes more efficient at removing energy from the system. This result stands in stark contrast with expectations from the hydrodynamic case, and, combined with the fixed frequency at which dissipation sets in, suggests that a new dissipation-range theory is required.

It is hoped that by carefully studying the dissipation range characteristics and dependences further we may begin to gain a better understanding of the mechanism(s) that convert magnetic energy into heat. Significant in situ heating of the solar wind is observed, and there is the possibility that a similar mechanism may be responsible for the acceleration of the solar wind near the Sun, an issue that has long puzzled scientists.

Submitted by Charles W. Smith and Kathleen Hamilton of the University of New Hampshire. Address comments or questions to Charles.Smith@unh.edu.