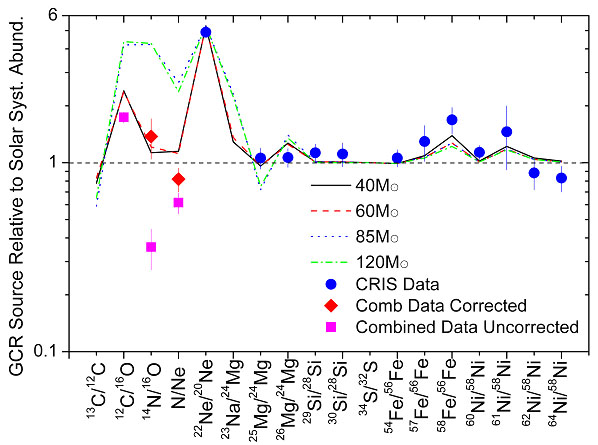 An earlier ACE News item (#74) presented measurements from the ACE/CRIS instrument that showed good agreement between cosmic-ray iron and nickel isotope ratios and two-component Wolf-Rayet (WR) star models. In these models, which were motivated by the five-fold overabundance of 22Ne in cosmic rays, a small fraction of material (~5%) from Wolf-Rayet stars with 60 initial solar masses was mixed with material of solar-system composition such that the 22Ne/20Ne ratio was normalized to the measured cosmic-ray ratio. This comparison has now been extended by adding magnesium and silicon isotope ratios measured by CRIS, and lower-Z isotope ratios measured by other experiments. In addition, more recent modeling results have been used that take into account stellar rotation effects and include stars with several different masses. The Figure above shows that the measured abundance ratios for nuclei heavier than neon are in generally good agreement with WR models for 40 and 60 solar masses, but the 25Mg/24Mg ratio does not agree with the model results for the rare, most massive stars (i.e. 85 &120 solar masses). For nuclei lighter than neon, the measured ratios (squares) do not agree with any of the model predictions. However, in 1997 J.P. Meyer and coworkers proposed a model in which a large fraction of galactic cosmic rays come from dust grains. If the nuclei are injected into the cosmic-ray beam as suggested in this model, then these ratios should be adjusted for the fraction of each element that exists in dust and gas.

Approximately 25% of oxygen in the pre-solar nebula is believed to reside in dust, nearly all nitrogen exists as a gas, and all neon exists as a gas. Unfortunately, the fraction of carbon in the solid state is poorly known. We have used the model suggested by Meyer et al. to make these adjustments (which should be regarded as approximate) and the results are shown as diamonds above. The adjusted values for N/O and N/Ne show reasonable agreement with the models. So all of the ratios above now generally agree well with the WR models, excluding the high initial mass star models. These new models require that ~20% of WR material must be mixed with material of solar system composition to normalize the measured and calculated 22Ne/20Ne ratio. So the fraction of WR material injected into the source is no longer a relatively small amount, as suggested by earlier work, but is a major component of the GCR source material. For this to occur, large amounts of WR material must be efficiently injected directly into the cosmic ray accelerator. Since most WR stars exist in OB associations (unbound clusters of massive stars) within superbubbles (giant cavities in hot tenuous plasma), and since ~90% of all core-collapse supernovae occur in OB associations, this strongly suggests that OB associations within superbubbles are the site of origin and acceleration of at least a substantial fraction of cosmic rays. For more information, see Binns et al. ApJ 634, 351 (2005).