The Origin of Suprathermal Electron Depletions in the Solar Wind 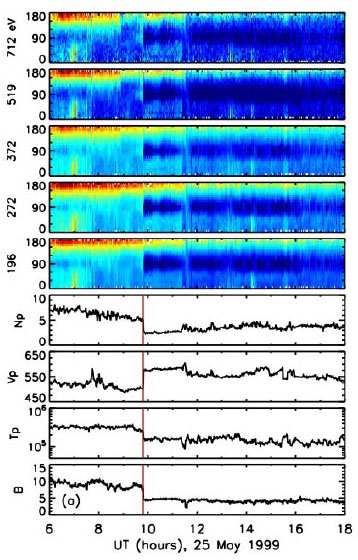 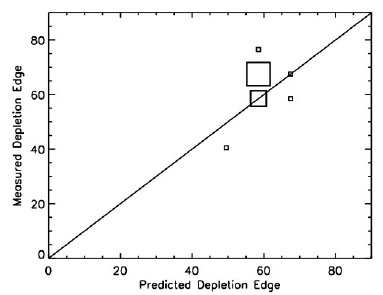 ACE News item #56 presented observations of depletions of solar wind suprathermal electrons (~70 eV - 1.4 keV) centered on and roughly symmetric about 90° pitch angle. It was suggested that such distributions arise from! combination of adiabatic focusing and mirroring associated with connection to a magnetic field enhancement beyond the spacecraft. From single point measurements, it is difficult to identify field enhancements beyond the spacecraft. However, one place where such an enhancement is relatively clear is at a reverse shock. We have examined all reverse shocks observed by ACE from February 1998 to February 2003 to test the predictions of the focusing/mirroring model of depletion formation. All 20 of these shocks were relatively weak, with instantaneous downstream to upstream magnetic field ratios ranging from 1.3 to 1.8. Electron depletions were observed upstream of each reverse shock. Figure 1 (top left) shows the depletion (dark region centered on 90°) observed upstream from (following) the 25 May 1999 shock.

To test the model, we compared the depletion widths observed upstream from the reverse shocks with predictions of the adiabatic model. The width is predicted to be a function of the strength of the magnetic field enhancement relative to the field strength at the measurement location. The model calculations must be performed in the appropriate reference frame; for reverse shocks this is the de Hoffman-Teller frame, in which the shock is at rest, the upstream flow velocity is parallel to the magnetic field, and the only electric field is that associated with a field-aligned cross-shock potential. Figure 2 (top right) shows a comparison of the depletion edge angle for each reverse shock for which a comparison was possible. The edge angle is the smallest pitch angle at which a depletion was observed, and is related to the width by: width = 180° - (2 x edge). The symbol size shows the number of points at each location (1, 4, or 6). Although this comparison covers only a limited range of widths, the predicted and measured values show good agreement.

These results strongly suggest that depletions are formed through adiabatic focusing and mirroring of electrons in association with magnetic field enhancements beyond the observing spacecraft. These adiabatic motions must persist over the Sun to 1 AU distance and beyond to produce the nearly symmetric halo distributions typically observed at 1 AU. In addition, these results provide support for the idea that the roughly symmetric halo population originates largely beyond 1 AU, rather than from scattering out of the strahl between the Sun and 1 AU.