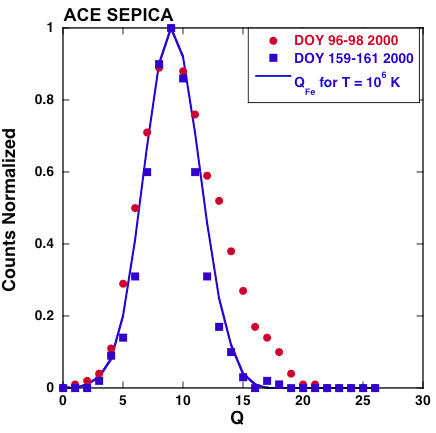 During large solar energetic particle (SEP) events, more than one source at the Sun and in the interplanetary medium may be responsible for the acceleration of particles. Based on cases when one source is dominant, events have often been subdivided into two classes, i.e. gradual events with acceleration at CME-driven shocks or impulsive events with acceleration in localized flares at the Sun. The latter typically have abundance enhancements of Fe and Ne over O and 3He over 4He. Ionic charge states also tend to be higher in these events. CME-driven events can accelerate ions in the interplanetary medium over a wide range of longitudes, while impulsive events tend to be more localized, thus requiring magnetic connection to a flare site to be observed.

The charge state distributions of Fe ions with 0.23 - 0.33 MeV/nuc from two different SEP events as obtained with ACE/SEPICA are shown in the figure normalized to their respective peak values for comparison. The event starting on DOY 95, 2000, (red symbols) occurred in conjunction with a C-class flare at W66, a longitude that is typically well connected to the Earth. The event on DOY 159, 2000, (blue symbols) was associated with activity on the center of the solar disk. For comparison, the curve in the plot (blue line) represents the instrument response to Fe from a 106 K source region, which is similar to the latter event. For the well-connected event, however, there is a significant extension of the distribution to higher charge states (including ~20% of the total ions) that cannot be modeled with a single temperature distribution. During the event this excess declined from a maximum of 22% to approximately 10%, before another injection of SEPs occurred. Simultaneously, the Fe/O ratios (not shown here) increased at the onset of the SEP event, consistent with velocity dispersion from a localized source on the solar disk, but then declined, together with the excess of high charge states. These observations suggest that ions detected from the disk event were accelerated by a shock-associated process, while the western event represents a mixture of ions accelerated by both shock and flare-associated processes. Moreover, the component associated with the flare process weakened over time faster than the component associated with the shock. The relative weakening may indicate differences in the lifetime of the two processes (shock acceleration in interplanetary space usually continues, while impulsive events are short). However, other factors, such as magnetic connection of the acceleration regions to the Earth, may also play a role.

Contributed by Mark Popecki and Eberhard Mobius of the University of New Hampshire. Please direct questions or comments to