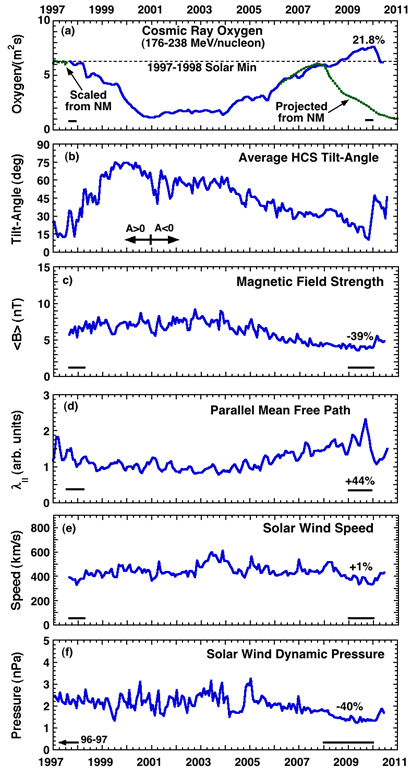 The elevated 2009 intensities measured by ACE [and by neutron monitors (NM)] were undoubtedly due to several unusual aspects of the cycle 23/24 solar minimum. During A<0 solar minima (when Sun's north polar field points inward) GCR ions reach 1 AU mainly by drifting in along the Heliospheric Current Sheet (HCS), and their path-length depends inversely on the tilt-angle of the HCS. The HCS tilt-angle [Panel (b)] played a key role in modulating the GCR intensity at 1 AU in 2007-2009 and the maximum intensities followed soon after the minimum tilt-angle within 2-3 months. However, the minimum tilt was less in 1987 (the last A<0 minimum) than in 2009. More important factors were the record-low interplanetary magnetic field (IMF) strength [Panel (c)] which was 39% lower than in 1997-98 (resulting in correspondingly greater drift velocities), and an extended period of reduced IMF turbulence. The estimated GCR scattering mean-free-path along the IMF [λll - which scales as B5/3/(δB2); see Panel (d) and Zank et al. JGR 103, 2085, 1998] indicate that λll was ~44% greater in 2009 than in 1997-1998. The reduced scattering and increased drift velocities enabled greater GCR access to the inner heliosphere in 2009.

The solar wind speed in 2009 was similar to that in 1997-1998 [Panel (e)], but the solar-wind dynamic pressure [Panel (f)] was ~40% lower due to a reduced solar-wind density. Although reduced dynamic pressure means that the size of the heliosphere is now shrinking, this probably has a minor effect on cosmic ray intensities at 1 AU because the intensity in the outer heliosphere depends only weakly on radius.

In 2010 the intensities suddenly decreased to 1997 levels following increases in solar activity, the HCS tilt-angle, and the IMF strength, and a decrease in ll. Since mid-2010 GCR intensities have been at 1997-1998 solar-minimum levels. Although the 2009 intensities were at a 50-year high level, measurements of 10Be deposited in polar ice cores over the last ~500 years (McCracken et al. Adv. Sp. Res. 34. 397, 2004) indicate that the space era has occurred during a period of very-low GCR intensity. Between the years ~1400 and ~1900 10Be production was typically ~40% to ~80% greater than in the early 1970s. It is possible that the near-Earth radiation environment is returning to more "normal" conditions. For more information, see the paper by Mewaldt et al. (2010) soon to appear in ApJ Letters.

This item was contributed by Richard Mewaldt, Rick Leske & Ed Stone of Caltech, Kelly Lave of Washington University, and Mark Wiedenbeck of JPL. Address questions and comments to