Celebrating 15 years of ACE in Space 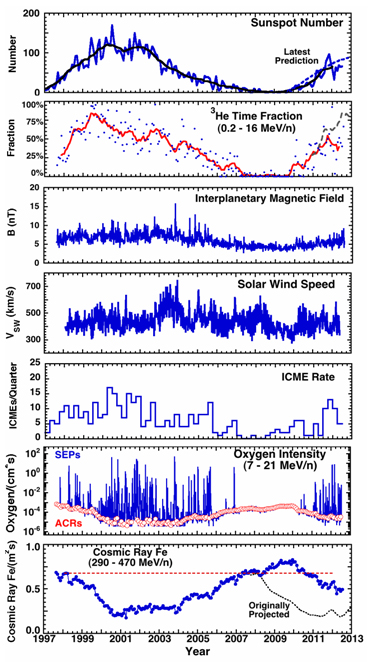 NASA's Advanced Composition Explorer (ACE) was launched from Cape Canaveral on August 25, 1997, and soon began its journey to L1. During its 15-year lifetime ACE made many comprehensive new measurements during the 1997-1998 solar minimum and the very active cycle-23 maximuim, and it is now recording the ascent to the cycle-24 maximum, as illustrated with data from several instruments.

The top panel shows monthly and smoothed sunspot numbers (SSN) from 1997 to mid-2012. In late 2007 the SSN reached solar-minimum levels and was expected to begin to increase. To everyone's surprise it continued declining, reaching the lowest level in ~100 years.

The cycle-23 maximum and extended solar minimum are also evident in the fraction of time that energetic 3He was present in interplanetary medium (Panel 2; based on ULEIS & SIS). The rare isotope 3He is accelerated in small flares and coronal jets that somehow produce a composition with 3He/4He ratios ~10 to ~10,000 times the solar value, as well as enrichments in heavy species from O to Fe, continuing through Pt and Pb (Z ≈ 78, 82; ACE News #81). Dashed line is projected from 13.1 yrs earlier.

The third and fourth panels show 1-week averages of the interplanetary magnetic field (IMF) strength from MAG (which reached the lowest level of the space age in 2009), and the solar-wind proton velocity (Vsw) from SWEPAM and SWICS. Superimposed on the long-term IMF and Vsw variations are the effects of high-speed solar-wind streams and interplanetary coronal mass ejections (ICMEs). Since January 1998, continuous real-time solar-wind data from ACE have resulted in a significant improvement in NOAA's ability to forecast space weather.

The fifth panel shows the frequency of ICMEs (measured by SWICS, SWEPAM and MAG and tabulated by Richardson & Cane; ACE News #84). From an average of ~50/yr in 2000 and 2001 the ICME rate dropped to ~2/yr in 2007, contributing to the very low IMF strength.

The daily-average oxygen rates from SIS in the sixth panel show >100 solar energetic particle (SEP) events during solar cycle 23, including four that rank in the top 10 of the space era. The underlying quiet-time O intensity (open circles) is due mainly to anomalous cosmic ray (ACR) O accelerated in the outer heliosphere, which varies by a factor of ~100 over the solar cycle at 1 AU. Currently, the rising sunspot number and SEP intensity in 2011-2012 (panels 1 and 6) appear to be consistent with the reduced solar activity levels currently predicted by NOAA.

The galactic cosmic ray (GCR) intensity at 1 AU is anti-correlated with solar activity. Measurements by CRIS show that ~380 MeV/nuc Fe returned to the solar-minimum levels of 1997 in 2007, when GCR intensities were expected to begin to decline. Instead, they continued to rise to the highest level of the space age ( ACE News #134). During the present A<0 phase of the 22-year solar cycle, particles entering the inner heliosphere drift along the wavy interplanetary current sheet rather than drifting down from the polar regions. The increased drift velocity resulting from a weaker IMF in 2008-2009 undoubtedly contributed to the record-setting GCR intensities. There are predictions that the Sun may be returning to a reduced level of activity such as has occurred roughly every 100 years beginning in ~1700. ACE has enough fuel to continue investigating these and other aspects of solar activity through the current solar maximum and well beyond.

This item was contributed by Richard Mewaldt of Caltech, Mark Wiedenbeck of JPL, Chuck Smith of the University of New Hampshire, Ruth Skoug of Los Alamos National Lab, and Ian Richardson of GSFC. Address questions and comments to