Neon and Oxygen Abundances in the Solar Corona 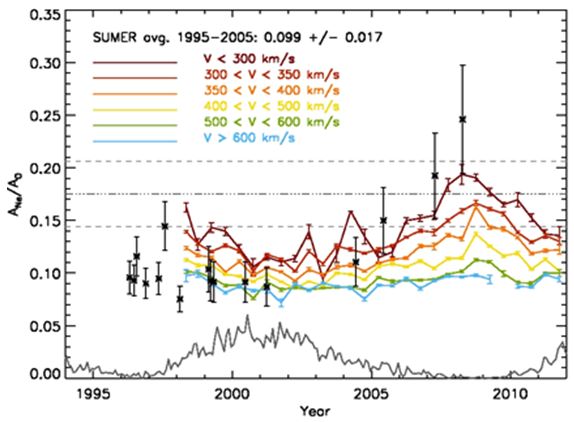 In ACE News #173 the Ne/O ratio in the solar wind was found to depend significantly on the solar cycle; the dependence was strongest in slow wind, and almost non-existent in fast wind. This result is important for two main reasons. First, it can be used to identify the source region of the slow solar wind by searching for the same variations in plasma structures in the solar atmosphere. Second, Ne/O is used to determine the Ne photospheric abundance, since Ne doesn't have photospheric lines that can be used to measure its abundance. The current value is determined from the O photospheric abundance and the Ne/O ratio measured in the solar transition region (Ne/O=0.17; see Fig. 1). Neon is a key element in the opacity of the solar interior, and its abundance is critical to determining the structure of the solar interior and location of the base of the convection zone. Recent downward revisions of the O abundance (hence also of Ne) have led to serious discrepancies between determinations of the structure of the solar interior from helioseismology and solar models. This discrepancy has been called the Solar Abundance Problem. Changes in the Ne photospheric abundance are a suggested solution.

We used SOHO/SUMER high-resolution coronal-streamer spectra to measure Ne/O from 1996 to 2008 and test whether they show the same solar-cycle variations as found in solar wind. The results (Fig. 1) show three main features. First, Ne/O in coronal streamers is not constant; it increased during the recent minimum, and showed no trend in the previous minimum. Second, streamer Ne/O is in excellent agreement with SWICS measurements in the slowest solar wind (ACE News #173), which included the ACE measurements in Fig. 1. Third, the Ne/O ratio in the solar corona and solar wind is significantly lower than in the solar transition region (horizontal lines in Fig. 1).

These results lead to several conclusions. First, the Ne/O ratio is not constant in the solar atmosphere, so it can't be used to determine the photospheric Ne abundance and address the Solar Abundance Problem. Second, the agreement between SUMER Ne/O in streamers and that in the slowest solar wind, and their similar solar-cycle dependence, suggest that streamers are the source regions of slow solar wind. In this scenario, streamer plasma is initially confined in large-scale closed magnetic structures, and released in the Heliosphere following reconnection between streamer closed field lines with open field lines from neighboring coronal holes. Third, the difference between the transition region Ne/O ratio and the coronal value from SUMER indicates that a fractionation process is active in the solar corona, which decreases Ne/O in the solar atmosphere. This process seems to be active from 1996 to 2005, but stops being effective during the solar minimum of 2007-2009. For more information, see E. Landi and P. Testa, ApJ 800, 110, 2015.

This item was contributed by Enrico Landi of the University of Michigan and Paola Testa of the Smithsonian Astrophysical Observatory. Address questions and comments to