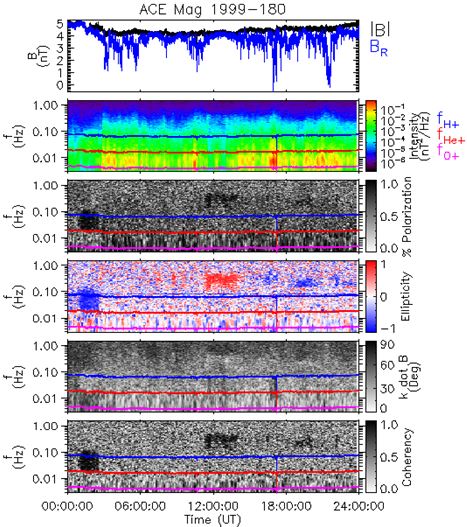 Figure 1: Daily spectrogram for day 180 of 1999 showing waves early in the day that are left-hand polarized in the spacecraft frame between the He+ and H+ cyclotron frequencies. The waves have a high degree of polarization and coherence and minimum variance directions along the mean magnetic field (see also ACE News #176 ).


The ACE/MAG team has found over 20 examples of low-frequency waves at 1 AU excited by newborn interstellar pickup ions (He+). The events span the lifetime of the ACE mission at L1 from 1998 to 2015 and were found using a new data product, daily magnetic spectrograms, that are available to the public at the ACE Science Center (see ACE Magnetometer Spectrograms and ACE News #176). An example spectrogram is seen below. A detailed study of the waves has been performed in a paper soon to be published in Geophysical Research Letters. The waves are seen in the middle of a rarefaction region lasting three days.

Neutral interstellar atoms transit the heliosphere and are largely unaffected by the solar wind and associated magnetic field until they are ionized either by photoionization or charge exchange. He+ is produced almost exclusively by photoionization from solar UV. Once ionized, the newborn ion executes cyclotron motion about the ambient magnetic field, is scattered and excites low-frequency waves that are Sunward propagating, transverse with field-aligned minimum variance directions, and left-hand polarized in the spacecraft frame.

Theory and our current understanding of the wave generation mechanism and source atoms suggest that the excitation of these waves is nearly constant and ever-present. The wave energy forms an important part of the turbulence that heats the solar wind in the outer heliosphere. A recent study of low-frequency waves due to interstellar pickup H+ (Cannon et al. 2014a,b) revealed that the waves can only be seen when the background turbulence is sufficiently weak to permit the slow accumulation of energy that this mechanism provides. Our preliminary analysis of the turbulence surrounding this observation is consistent with this idea.

This item was contributed by Matthew R. Argall and Charles W. Smith Of the University of New Hampshire on behalf of the ACE/MAG Team. Address questions and comments to