CRIS and SIS Science and Technology 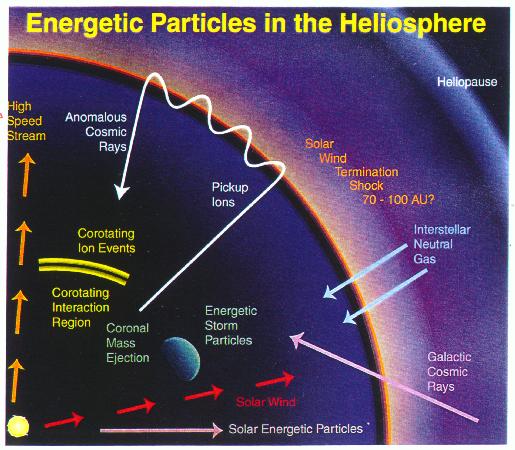 The local space environment is full of energetic particles. Nuclei (both fully ionized, or stripped of their atoms, and partially ionized), electrons, and neutral interstellar gas flow throughout the heliosphere. The heliosphere is that region of space in which the Sun's magnetic fields and outflowing particles (solar wind, solar energetic particles) are dominant energetically over other sources of particles and fields. It is roughly bubble-shaped, with a radius approximately 100 times that of the Earth-Sun distance (the Earth-Sun distance is about 93 million miles, or 150 million kilometers), lying well beyond the orbit of Pluto, the most distant planet. Many particle populations coexist in the heliosphere, from the relatively low-energy solar wind (still travelling at 400 km/sec!) to the highest energy galactic cosmic rays (fully stripped nuclei traveling very close to the speed of light, 300000 km/sec).

As the Sun is the dominant source of particles and magnetic fields in the heliosphere, its activity has tremendous effects here on Earth. Solar activity varies over an 11-year cycle, reflected most notably in the numbers of sunspots seen on the Sun's surface. When activity reaches a maximum, higher-energy particles originating outside or near the edge of the heliosphere (such as galactic cosmic rays and anomalous cosmic rays) have a more difficult time reaching deep into the heliosphere, and the fluxes of these particles decrease. At the same time, large solar flares occur with greater frequency, as do other types of solar particle events. These particles can do damage to communications satellite electronics, and can be hazardous to the health of astronauts in space if they are not adequately shielded.

GCRs come from outside the solar system but generally from within our Galaxy. GCRs are atomic nuclei from which most or all of the surrounding electrons have been stripped away during their million-year passage through the Galaxy. They have kinetic energies ranging from 100 MeV/nucleon to tens of thousands of MeV/nucleon. The study of the sources and acceleration mechanisms of GCRs is an area of active interest for the ACE CRIS and SIS scientists.

Earlier cosmic ray experiments studied the elemental composition of GCRs in detail. The isotopic composition of GCRs, however, reveals more information about their history. CRIS's primary scientific responsibility is the measurement and characterization of these particles, and thus will provide us with a direct sample of matter from regions of the galaxy far beyond our solar system.

Discovered just over two decades ago, ACRs begin as neutral interstellar atoms which drift into the heliosphere. As they approach the Sun, some of these atoms are ionized, either by solar ultraviolet photons, or by collisions with ionized solar wind particles (charge exchange). Once these particles are charged, the Sun's magnetic field picks them up and carries them outward to the termination shock at the edge of the heliosphere. They are called "pick-up ions" during this part of their trip. Upon reaching the shock, some of them are accelerated to cosmic ray energies (~10 to 100 MeV/nucleon), after which they may make their way back into the inner heliosphere, where they are identified as ACRs. Which particles are accelerated and how this acceleration occurs is still a subject of scientific debate.

The ACRs represent a sample of the very local interstellar medium. They typically have a lower kinetic energy than GCRs, and are thus tools for studying the movement of energetic particles within the solar system, for learning the general properties of the heliosphere, and for studying the nature of interstellar material itself. One of the primary scientific responsibilities of the SIS instrument is the identification and characterization of the ACR particle population.

These are atoms which are associated with solar flares and other eruptive events on the surface of the Sun, such as coronal mass ejections (CMEs). CMEs and solar flares frequently inject large numbers of energetic nuclei into space, and the composition varies from event to event. The shocks formed by CMEs and flares can accelerate these particles from ~0.1 to several hundred MeV/nucleon. The mechanisms involved in producing different types of solar eruptive events can be better understood by studying the composition and charge of SEPs. They typically have lower kinetic energies than ACR or GCR nuclei. SIS is designed to measure the elemental and isotopic composition of these particles in order to measure the composition of the Sun.

Two custom analog CMOS VLSI chips were developed for use on ACE. One contains 16 complete discriminator/12-bit pulse-height-analysis chains for the readout of heavy ion silicon strip detectors as are used on SIS (see the SIS page for more information). It was fabricated using the radiation-hard 1.2 µm CMOS process of the United Technologies Microelectronics Center. The second chip was fabricated by Harris Semiconductor, and contains the active elements of a single precision pulse-height-analysis chain. The chips designed in this effort and the techniques employed are expected to be applicable in science payloads of future missions, especially those which place extraordinary premiums on weight, power, and/or performance. As an example, the chips containing the pulse-height-analysis electronics draw a factor of 3 less power and occupy significantly less board space than previous designs.

Developed at Washington University in St. Louis, the SOFT system will be used to determine particle trajectories in CRIS. While this technique for determining trajectories of charged particles has been used in balloon-borne experiments, it is the first time such an instrument will be flown in space.