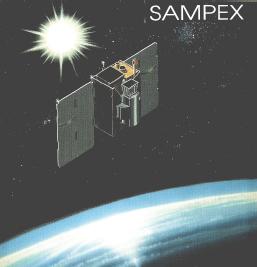 The goals of the SAMPEX data center at Caltech are to enable community access by developing an up-to-date flexible web-based system that will facilitate access to SAMPEX data by outside users, and to provide for the eventual permanent archiving of the SAMPEX data set at the Space Physice Data Center (SPDF).

The Solar, Anomalous, Magnetospheric Particle Explorer - SAMPEX - was the first of NASA's Small Explorer (SMEX) series. SAMPEX was launched July 3 1992 into an 82 deg inclination orbit carrying four instruments designed to measure energetic nuclei and electrons over a broad dynamic range. SAMPEX is designed to study energetic particles of solar, interplanetary, and magnetospheric origin, as well as "anomalous" cosmic rays, thought to be accelerated at the solar wind termination shock, and cosmic rays from Galactic sources. While over the geomagnetic poles SAMPEX can measure the interplanetary flux of energetic particles; at lower latitudes it surveys magnetospheric particles over all local times twice a day.

This web site contains data from the launch of SAMPEX in July 1992, through the end of the official science mission: June 30, 2004.

The SAMPEX spacecraft continued to operate until it reentered the earth's atmosphere on November 13, 2012. Some science data from this period are also posted here. However, users should be aware that these data are not verified to the same extent as the data prior to June 30, 2004.