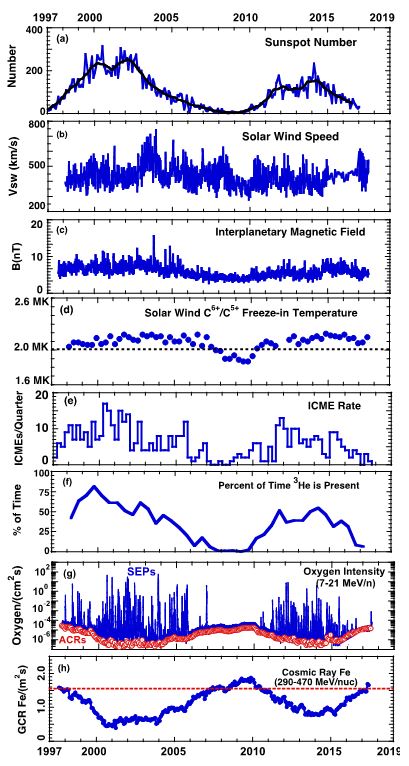 NASA's Advanced Composition Explorer (ACE) was launched from Cape Canaveral on August 25, 1997 carrying nine particle and fields instruments, after which it began the journey to the inner Lagrangian point (L1), where it has remained in orbit since early 1998. During its 20-year lifetime ACE has made comprehensive new measurements during the 1997-1998 and 2006-2009 solar minima, the Cycle 23 and 24 maxima, and it is now recording the recovery to the cycle-24/25 minimum, as illustrated here with data from several instruments.

Panel (a) shows monthly and smoothed sunspot numbers (SSN) from 1997 to early-2017. In late 2007 the SSN reached solar-minimum levels and was expected to begin to increase. To everyone<92>s surprise it continued to decline, reaching the lowest level in ~100 years. During 2009 the interplanetary magnetic field strength [Panel (c)] reached the lowest level of the space age and soon thereafter galactic cosmic-ray (GCR) intensities [Panel (h)] reached their highest space-age levels (ACE News #122). The solar wind freeze-in temperature measured by SWICS ([Panel (d)] also reached a minimum at this time. Surprisingly, anomalous cosmic ray (ACR) Oxygen, which is accelerated in the outer heliosphere [red trace in Panel (g)] did not reach record-setting levels (ACE News #136).

Panels (c) and (b) show 1-week averages of the interplanetary magnetic field (IMF) strength and the solar-wind proton speed. Superimposed on long-term IMF and solar wind variations are the effects of high-speed solar-wind streams and interplanetary coronal mass ejections (ICMEs). ICME properties are measured by several instruments on ACE and tabulated by Richardson & Cane [Panel (e) and ACE News #84]. From an average of ~50/yr in 2000 and 2001 the ICME rate dropped to ~2/yr in 2007, contributing to the reduced IMF strength. The average ICME rate during the cycle 24 maximum (2010-2017.5) has been ~37% lower than in cycle 23, which is partly responsible for the reduced number of geostorms.

Solar cycle effects are also present in the percentage of time that energetic ~0.1-10 MeV/nuc 3He was measured by ACE in the interplanetary medium [Panel (f)]. The rare isotope 3He is accelerated in small flares and jets that somehow produce 3He/4He ratios ~10 to ~10,000 times the solar value and also enrichments in heavy elements like O and Fe (see ACE News items #120, #126, #162, and #179).

The daily-average oxygen rates from SIS in Panel (g) show >100 solar energetic particle (SEP) events during solar cycle 23, including four in the list of top 10 proton events of the space era. The number of large energetic oxygen (and proton) SEP events is down by ~50% in Cycle 24.

There are predictions that the Sun may be returning to a reduced level of activity such as occurred roughly every 80-100 years over the past 500 years, which may lead to further increases in the record-breaking GCR intensities of 2009 (GCR Fe already passed the 1976, 1989, and 1997 solar minimum levels). ACE has enough fuel to continue monitoring these and other aspects of solar activity until 2024.

Most ACE data products shown here are available from the ACE Science Center.