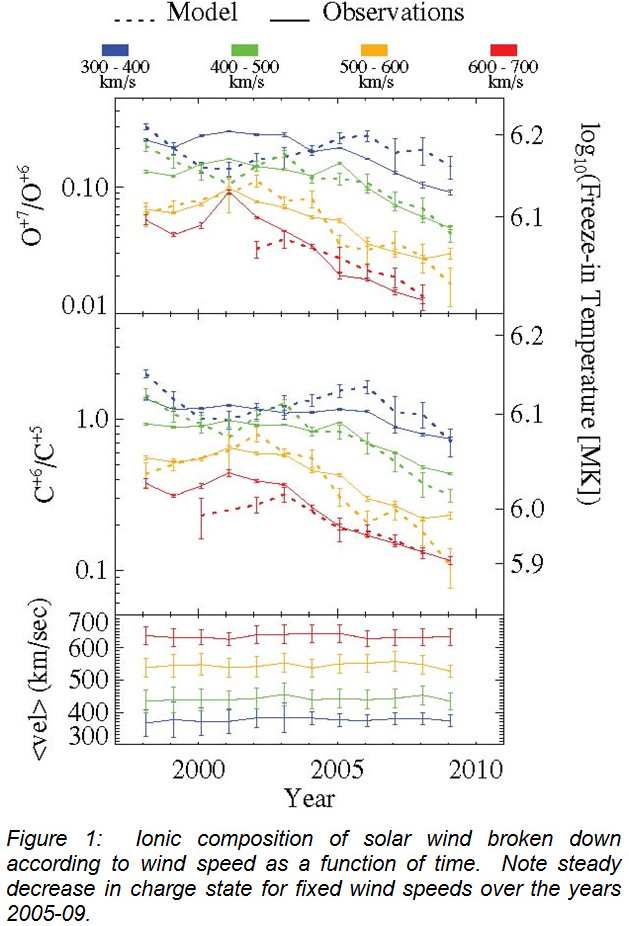 In ACE News #142 we discussed how the decreasing flux of interplanetary magnetic field lines during the protracted solar minimum could be accounted for by ongoing magnetic reconnection below the Alfven critical point. We suggested that reconnection was ongoing on the quiet Sun at a steady rate over the years when there was remarkably little transient activity evident.

If we take this conclusion to the next step, we can examine the conditions for solar wind acceleration under decreasing interplanetary fields. Since the reconnection below the Alfven critical point reduces not only the interplanetary field, but also the magnetic field pressure in the Sun's lower atmosphere, this leads to a decrease in the height of the Alfven critical point. In short, the solar atmosphere contracts under reduced pressure and this changes the circumstances and boundary conditions for solar wind acceleration.

ACE has been instrumental in establishing the fact that the ionic composition of the solar wind varies with wind speed (see ACE News 26 and 141) and for transients (see ACE News 16, 24, 29, 45, 50, 52, 63, 84 and 124). This indicates that there is a direct correlation between the wind speed and electron temperatures at the source of the acceleration. The recent extended solar minimum provided a unique contradiction to this relation.